Survive Another Deathtrap With The Announcement For Deathtrap Dungeon: The Golden Room
by David 'Hades' Becker [ Friday, 25th of June 2021 - 07:00 PM ] 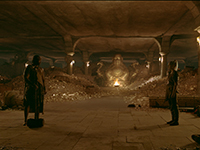 There certainly were more FMV-style video games to show up during this year's E3 and here we go with one more out there for next year with Deathtrap Dungeon: The Golden Room. This would be one more that will be coming out of Wales Interactive to give us more playable movies to enjoy on all of our gaming systems out there. They do know how to make them work and flow, and now we have at least two to look forward to now. With one of the differences with Deathtrap Dungeon being that we are not seeing it all recorded remotely for our enjoyment but with some of the new technology used to film some of our favorite shows and films as of late. Only this time it is being used for a video game and we can try to dictate how it will all work in the end. If all goes to plan, that is.

Beyond all of that and the slight teaser we have for Deathtrap Dungeon here, there is not much more to go on as of yet. The story seems to revolve around a female adventurer that needs to survive all of the deathtraps that the title suggests and we will have to select the actions to perform during the game to make sure she does not die along the way. Deathtrap Dungeon looks to have some fantasy and ancient style lore and set designs to it all from what we can see here, but given the way it was all captured, that could be changed on the fly too. I am kind of hoping that it does so that it plays with expectations and then delivers something we could not have expected as of yet. We will only have to wait and see for now, though. Have a look and get ready to wait until 2022 to get in on it all.

Based on Ian Livingstone’s multi-million selling gamebook, Deathtrap Dungeon: The Golden Room is an interactive movie featuring a daring female adventurer, a series of perilous tricks and traps, and a rich reward.

Featuring the same CGI technology used in Disney’s hit TV show The Mandalorian, the Deathtrap Dungeon: The Golden Room is a completely live-action fantasy adventure. Coming to all major gaming platforms in 2022. Demo now available on Steam and Xbox consoles.

As the Brave Adventurer faces many foes, you must tread carefully on your quest through to the Golden Room. Face the Trial-Master of the Dungeon Vhaidra and her tricks and traps as she tests your skill. Beware of the Bloodbeast lurking behind any door.

Decide wisely, or find yourself in a Deathtrap.

Are you enjoying the resurgence of the FMV games that we have had here as of late or will they be smaller titles for a smaller group of gamers? Would you like to see Deathtrap Dungeon change things up with the virtual set technology they are using or do you think it will stick the fantasy and ancient themes we have in this trailer? How well do you think it will be implemented based on the previous titles from the developer we have to compare with? Give us all of that feedback and more down in the comments and then feel free to discuss it all. When there is more to share for Deathtrap Dungeon: The Golden Room, know that we will share it all here. Just be sure to keep checking back for all of that and everything else that we could muster up along the way.