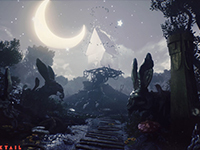 The tale of the Baba Yaga is one that we have seen and heard in so many different forms of media over the decades and now we get to add Blacktail to the list of things that will be telling the story. Well, telling the story of sorts that is. This would be the latest title to get announced from The Parasight out of this year's E3 and it looks like they will be taking us down a path that many others do not. Blacktail will be telling a story from the perspective of the Yaga and possibly how they became the thing that is of the nightmares many believe. Not specifically an original story, but a way to deliver us a new action-adventure title on the PS5, Xbox Series X, and PC at some point in time. I know it has caught my eye just by proposing the basics we have just mentioned here. There is a bit more to it all, though.

In Blacktail, we will play as Yaga who starts out as a timid young girl that has been kicked out of their settlement for witchcraft suspicions. Given all that, and following the dark voices in Yaga's head, they will take up their hunting bow and head out into the woods to uncover some other forms of mysteries as they try to just survive. The gameplay we have for Blacktail makes it look like things might be starting a bit further down the line in the story with the decay already setting in, but that could just be a side effect of things. My guess is that it will be some of the extra powers Yaga will pick up along the way and thus cement them in that horrible witch role that the legends have always told about the Baba Yaga. It sounds like a great twist on a classic story, and I know I am fully down to see how it all plays out. Have a look at the teaser we have just below to get a better idea of what is going on here.

Create the myth of Baba Yaga in Blacktail, a first-person action-adventure game coming to Steam, PS5, and Xbox Series X|S this winter!

You play as Yaga, a timid and misunderstood young girl accused of witchcraft and cast out from her village. Guided by a dark voice, you’ll take up your hunting bow and unlock mystical powers on your journey to find your missing sister, and uncover the ancient mysteries of the forest.

Was this what you were expecting from a title called Blacktail here or do you think it will make more sense in practice? Do you think this will be an origin story of sorts or will it just be someone taking up the mantle along the way? Do you suspect that we are seeing later state gameplay here with the visuals or will Yaga be slightly deformed from the start of it all? Give us all of that feedback and more down in the comments and then feel free to discuss it all if you so wish to. We will have a close eye on Blacktail as more spills out for it. All you need to do is keep an eye on the site here to see and experience more of it before and after it launches into the world.