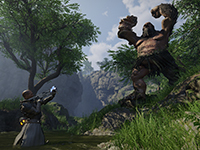 One more new title and sequel was dropped on us during E3 with the announcement of ELEX II bringing the IP back to us and on the PS4, PS5, Xbox One, Xbox Series X, and PC. You may or may not remember the original title that came out before from Piranha Bytes and THQ Nordic that we saw years ago, but no matter the case, we are getting another one. All to carry along the fun of ELEX just a bit more and in a bit more of a metal way. That is if this trailer has anything to say about it all with the fast-paced and hardcore action that is being used to show things off. Just as we would normally expect from the event as we normally do. I am just hoping that it holds up to the look and hype of it all this time.

In this one, it looks like all that we did in the first ELEX has been for not as a new faction has risen up to cause all kinds of hell for the planet again. That and there happens to be another new threat against the planet we will have to face down too. You know, the usual save the world style of thing we have in these games as we roll out to slice and dice everything in our way. This is all a cinematic trailer for ELEX II, so we have just the basic text to go on here over the video but at least we know it is coming. Now we just need to wait to see how it will pan out and what it will bring when it does come. Have a look and see what we are talking about and let the hype start to ramp up for you too.

Probably the best-kept secret is finally getting revealed: The next Piranha Bytes Game is indeed ELEX II. Surprise!

The planet Magalan has seen some rather peaceful years after the Events of ELEX I: old factions have been vanquished, new factions have risen. The Berserkers’ attempts to regrow and terraform the lands have started to bear fruit. After the defeat of the Hybrid, the Albs are no longer a threat. However, our hero - Jax - returns with knowledge of a new menace that’s casting a shadow over Magalan. It falls to Jax to unite these different factions together to face this darkness together.

ELEX II is in development for PC, PlayStation 4, PlayStation 5, Xbox One, and the Xbox Series S|X. There is no official release date yet. ELEX II can be wishlisted now on Steam.

Did you have a chance to play ELEX the first time around or is this the first you are hearing about it all? Do you think this all makes the events of the previous title pointless or is it just of society always plays out? What do you think will be added into this title this go and will it be anything truly new for the industry or will it just be a way to give us more of the story out there? Give us all of that feedback down in the comments and then feel free to discuss it all. When there is more to share for ELEX II, we will drop it on the site for you. Just be sure to keep checking back for all of that and much more. Hopefully, we will be able to keep it all flowing.