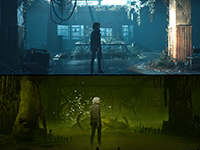 As if we could not see it coming beforehand, it looks like The Medium is finally making the leap from the Xbox Series X and PC to head over to the PS5. This was one of the smaller announcements that slipped out during E3 this year from Bloober Team and it should be something to excite us all just a bit more. It was another great entry from the developer before when it hit us and now on September 3rd, we will get to experience the dual-world mechanics and maybe with a few new features along the way. They are looking to use the features of the DualSense controller for The Medium to mix in a few things we did not get before; they just are not fully listed as of yet. Hopefully, it is more than just a bit of extra rumble and they will be able to use the haptic feedback and triggers just a bit more than expected.

In addition to all of this, it looks like The Medium will also have a physical edition out there on all of the platforms too. It will also be in a new Two Worlds Special edition that comes with a Steelbook, a soundtrack of the game, and a 32-pages hardcover artbook to add to the collections around our homes. All in the North American regions out there and then the Japanese markets will see The Medium hit before the end of the year here. That is something I am a bit more interested to see how it is received given the differences in cultures and the supernatural elements within. If you have missed out on all of this before now, you can have a look at how the game will look on the console and then get ready to play it all again in a few months from now.

Open your eyes and immerse yourself in the disturbing and oppressive atmosphere… Bloober Team is excited to bring The Medium to PS5 to take advantage of the console hardware as well as the DualSense controller, offering players the immersive experience of exploring two worlds simultaneously, shocking fans and players alike throughout the game.

Bloober Team and leading global publishing partner Koch Media are thrilled to bring The Medium to retail stores worldwide. The game will be published and available in retail on September 3 for PC, Xbox Series X|S, and PS5, with The Medium: Two Worlds Special Launch Edition will also be available in select territories, which comes complete with an exclusive Steelbook, a soundtrack of the game and a 32-pages hardcover artbook. In Japan, the publisher NA Publishing will bring the game to PS5 and PC by Holiday 2021.

The Medium is a third-person psychological horror game that features innovative dual-reality gameplay. Players assume the role of Marianne, a medium gifted with several psychic abilities, and explore the real and spirit world both alternatively and simultaneously to uncover a dark mystery masked by disturbing secrets, sinister spirits, and devious puzzles only a medium can solve.

Are you at all surprised to see that The Medium will be hitting the PS5 here or did you think it was going to be an exclusive up to now? What do you think we will get to experience with the DualSense controller and will it be more than just a bit of a rumble? Do you think it will be accepted well by the non-Western markets or will the themes be too off to be successful? Let us all know down in the comments what you are thinking and then feel free to discuss it all if you so wish to. We will keep sharing more for The Medium as we get it all, so be sure to stick close to the site for all of that. You will not want to miss out on all of that as it flows.