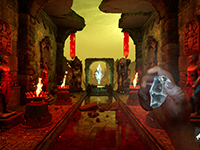 The Sumer releases keep flowing out there with Escape From Naraka getting its release date slipped out there during one of the smaller shows during E3 this year. It may not have been the biggest title that we have been keeping an eye on, but XeloGames has been toiling away at it and now we will see it hit the PC on July 29th. That is if you did not want to get in on an early demo of Escape From Naraka that might still be out there by the time you read this. I am not sure why we get timed demos that go away before the full launch, but it is a thing and something going on after the Steam Game Fest that we had. So many PC games have been there and it would be nice to have all of the time to play them all. Even if they are just small slices of the games out there.

If you have missed out on what Escape From Naraka is, you can have a look at the trailer we have had before just below. It is a first-person platforming title that will take us through a whole lot of Balinese-themed locations. Locations that are 3D scanned from some of the real-world places for us to experience in a virtual way too. All while trying to dodge and survive some of the other horrors out there that are based on the same mythos. It would be nice to have more to see for Escape From Naraka to get us all ready for its release, but I guess that is what the demo that was out there was for. Take a look and get ready to jump in and run about the world in one more title out there soon. Just over a month from now if it looks like it is going to scratch your itches out there.

Headup announced that their upcoming first-person survival platformer, Escape From Naraka, will be released on Steam on July 29th. Excited fans can get a first taste of Naraka’s exotic atmosphere in the Steam Next Fest demo which is available for one more day.

Escape From Naraka is a first-person survival platformer with exotic Balinese themes. Taking huge inspiration from Balinese legends and local mythologies, the game makes you platform your way through a nightmarish temple. Every level will challenge you through several themed stages, each of which giving you new trials to complete. You will have to master the arts of dodging and timing to be able to survive!

Did you keep an eye on Escape From Naraka since we first heard about it all or did you miss out on it up to now? Will you be taking in the demo for it all or did you miss out based on the timing of it all? Are you excited to see these new places from the world exciting to finally get to experience and would you like to see even more settings like this out there? Give us all of those thoughts and feelings down in the comments and then discuss it all. We will offer up what else we have for Escape From Naraka on the site, so be sure to keep checking back in for all of that. More so as we aim to wrap up the rest of the coverage we have from the events that have been out there for a while now.