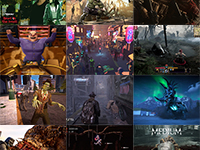 It was another short week here in the States but that does not mean that we did not have much to cover this week. There did happen to be quite a few video games that received some big updates and announcements out there. Some of them, like Avengers and The Sinking City, will be getting their PS5 and Xbox Series X updates soon. Other video games, like Stubbs The Zombie and Six Days In Fallujah, had full announcements that they were coming to us this year. Not a bad haul when you also take in that we had a review mixed into the batch of everything that was flowing out there too. It was short but fierce indeed.

As we gear up for the next week, we take stock of the fact that we have a few more video games in the review process that we can not speak of just yet. There might also be some film news mixed into it all if we have the time. Time and mental capacity to do so too. The latter I feel like will be the easier part of it all given the relaxing nature of some of our video games out there. We will do what we can to carry on and not let ourselves get too far down. If you would like to help with this at all, feel free to shoot over an email with some samples and we can see if we can get you added in to help take on some of the burdens.