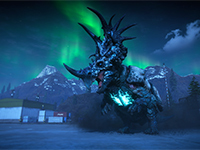 For a while now, it has only been the PC gamers out there that have been able to get in on the early stages of Second Extinction out there. That is looking to change here in the Spring with the announcement that Systemic Reaction is looking to bring gamers access to it all on the Xbox One and Xbox Series X. All of which through the Xbox Game Preview program that many have been taking advantage of for a bit now. We just now get to see that Second Extinction will be joining the list of it all here for more to enjoy. Now if only we had a solid date to look at for it all here instead of just a new and flashy trailer announcing it all.

Yes, that was my poor attempt to segue into the new gameplay trailer we have for Second Extinction that shows off not only this announcement but a few new things in the game to explore and take in. Most of which is in terms of the fun look we have to all of these mutated dinosaurs out there in the game's world. I personally like the look of it all even if it looks like some of the graphics feel a bit dated given the timeline that Second Extinction is launching on. That does not look like it will take away from the fun that could be mixed in here as long as the mechanics and basics of the game hold up past the Early Access and now Game Preview we will be seeing here.

Systemic Reaction has announced that the co-op multiplayer FPS Second Extinction will come to Xbox Series X|S and Xbox One via Xbox Game Preview in spring 2021. Squad up with a range of powerful weapons and fight on your own or with friends against monstrous dinosaurs long thought extinct — now mutated and deadlier than ever!

Will you be giving Second Extinction a shot when it hits the Xbox systems or will you be sticking to the PC versions of it all instead? What do you think of the fun look we have here for the dinosaurs and how flashy some of them could look to add to some of the enjoyment? Do you think that the core gameplay will be indicative of the final product or will we see many tweaks over time with these early access points? Let us all know down in the comments and then feel free to discuss it all as you wish. As we find more for Second Extinction, it will be shared here for you. All you need to do is keep checking back in for all of that and much more.