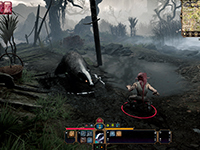 The development and progress continues for Baldur’s Gate 3 and this time it looks like we are getting some bigger things in the next update Larian Studios has for us. There will be the usual tweaks and quality of life things in there as always, but this time it looks like we are getting a fully new class for us to play with in the game. Baldur’s Gate 3 will soon be getting the Druid class that will carry along many of the things that the class is known for in the D&D settings out there. Not too shocking there, but it is a bit surprising with how tricky this class could have been for them to bring in with all of the shapeshifting and companions that could have been harder to get correct here.

The new Druid class will hit Baldur’s Gate 3 sometime soon and will offer the use of nature as a weapon as they always have. They will also be able to shapeshift into eight different animals from the start with a Deep Rothé, Cat, Raven, Dire Wolf, Badger, Spider, Polar Bear, and Aberrant. Each will bring their own flavors to the game and have NPCs react to them in accordance during the campaign. It also sounds like there might be some different dialog options with the Druid also getting the custom language for the class that we see outside of the Baldur’s Gate universe too. Mix in all of the other magical and combat abilities for them and we have another well-rounded class to play with. That is the hope even if I am sure there will be some tweaks and changes to comes post-launch for it all.

The Druid class comes with over 30 spells and abilities, including Wild Shape. New dialogue and voice-over have also been recorded so that playing a Druid delivers the same deeply narrative experience as the other classes (Humans, Elves, Half-Elves, Halflings, Dwarves, Tieflings, Drow, etc.). We won’t spoil them, but those who visit Druid’s Grove as a Druid may enjoy a game of spot-the-difference. And of course, as a game that reacts to who you are, there will be new rewards, options, story moments, and interactions scattered throughout Act 1.

With the power of the wilderness at their fingertips, Druids can transform their shape to adapt to different situations. Crunch bones and slam into enemies as a Dire Wolf or Polar Bear. Spin your silken thread over the environment as a Spider. Soar above Faerun as a Raven. Sneak into hostile spaces unnoticed as a Cat. Burrow under the earth and ambush opponents as a Badger. Or temporarily embrace the tadpole that the Mindflayers have implanted inside you, discovering a new, mysterious Aberrant Shape.

There will be eight Shapes available: Deep Rothé, Cat, Raven, Dire Wolf, Badger, Spider, Polar Bear, and Aberrant. NPCs will react to your animal form in procedural ways. Bear blocking your path? Assume Bear Shape and speak his own language!

D&D fans will know that Druids traditionally come from one of a number of Circles. Druids will be able to choose from one of two Circles to inform how they play:

Did you suspect that you would be seeing the Druid in the mix for Baldur’s Gate here or did you want to see a different class make the cut? How do you think things will procedurally shift based on the animal form you opt to take? Which of the two different circles will you be looking to play with here or will you just go through it all a few times to give them all a chance? Let us all know down in the comments and then feel free to discuss it all too. As more updates for Baldur’s Gate 3 flows out there, we will add them to the site for you. Please keep checking back in for all of that and much more.