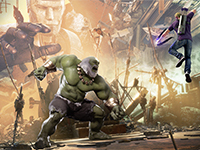 We are almost done with the wait to be able to see if Marvel’s Avengers will make another huge comeback and on the PS5 and Xbox Series X now. The date has been set down for when these versions of the game will be out there for us to purchase or upgrade to. This will be a free upgrade before you worry and will carry over all of your current data to this new version of Marvel’s Avengers if you happen to have the consoles to play it all. All good news and it also gives you until March 18th to be able to find one of these machines if you want to jump in right when it all goes off. All of which will run the game on the new systems natively with all of the bigger bells and whistles the systems should be able to give us.

That is all great news and all, but that is not where it all ends as it will also be getting another character to the Avengers roster on the same day. A new hero, villain, sector, and story to dive into for it all with Hawkeye and Maestro going at odds in a new Wasteland area. All while trying to tell the story of how the future may not have been saved in general and the Kree could still be here to destroy it all. Building off part of what the core story in Marvel’s Avengers went down but felt like just ended without many resolutions. Maybe this will be the team at Crystal Dynamics giving us more the style of gameplay that felt engaging and not rote as it became in the aftermath of the main adventure with Kamala. It does look like it could go either way with the new deep die we have to enjoy.

In terms of Hawkeye here, it sounds like they are trying to make him feel different than Kate Bishop after her release in the game not too long ago. Some thought that he might just be a bit of a reskinned version of her character, but there does look to be some variations in Marvel’s Avengers for him. He will focus more on the arrow variations more than Kate but will still have the same melee attacks that she does based on his run as Ronin and the Old Man Hawkeye lines of it all. He does still look like a similar character here but I hope it is just how the video was edited to give him a highlight. Thankfully, we do not have to wait too long to see for certain all of these things we are just assuming at this point.

Today, Square Enix announced that Marvel’s Avengers launches on the PlayStation 5 and Xbox Series X|S consoles on March 18, 2021 alongside the second new playable Super Hero for the game: Clint Barton, also known as Hawkeye, the unmatched archer with unerring precision. Players who own the PlayStation 4 or Xbox One version of the game can upgrade to the full next-gen version at no additional cost and transfer their save game to keep their progress.

Clint Barton will bring his unique talents to the game’s roster as part of Marvel’s Avengers Operation: Hawkeye – Future Imperfect at no cost to owners of the core game on all platforms. In addition to a new playable Super Hero and the new chapter in the game’s ongoing Avengers Initiative story, Marvel’s Avengers Operation: Hawkeye – Future Imperfect also introduces a powerful new villain: Maestro, a version of Hulk with Bruce Banner’s brains and the Hulk’s strengths and abilities, now driven mad in an apocalyptic future.

Are you excited to be able to dive into Marvel’s Avengers on the next-gen systems or will that be missed by more out there than they are hoping? Could we be seeing a whole new and major storyline mode mixed in here or is that just being too hopeful than getting the same we saw just recently? How do you think this will affect the rest of the game and will we see a new version of the character that does not seem to be a re-skin here? Give us all of those thoughts and feelings down in the comments. If there is anything more to share for Marvel’s Avengers, you know we will share it all here. Be sure to keep checking in for all of that and much, much more.