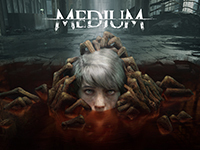 We sit down and review The Medium. A new horror game that has us balancing two different worlds. Here is our review of The Medium

The horror titles keep flowing out from Bloober Team and they keep moving away from the walking simulators we have seen many times before the launch of The Medium. This being the latest in the line of titles from the studio as they try new things to engage the gamers and give us more compelling and frightening stories to enjoy. The big thing here in The Medium being the use of a Dual World mechanic where the character exists in two different locations at the same time and we must navigate it accordingly. Is that enough to suck us all in or is there a lot more to the game than just that? That is why we are here with our review of the game and just how well it works on the PC and Xbox Series X. In horror titles, mostly in the past, using a fixed camera in a game can lead to some great terror and fear of not know what could be around the corner. The Medium aims to use this, and while it works well in the other titles, it feels more of a nuisance than anything to help drive home the terror. There was never something lurking around the corner that was not already predicted or dictated. This left it more to lead to confusion on where to actually go in the levels and areas. Sometimes even going in circles just because a door or opening is slightly out of view and too obfuscated if you are not just hugging corners. All of which could have been forgiven in The Medium if there happened to be one instance where we needed to worry about something lurking that we could not detect with our Insight ability.

That aside, it also feels like there was a missed opportunity in The Medium to mix in any of the combative abilities that were available on the other side of the shroud. We were able to see spiritual blasts and shields placed and had to use them to navigate puzzles, but not once did we have to use them to attack or fight. Even when it came to the "bosses" in the game. We are driven down the tense hide-and-seek gameplay or just watch as the cinematics show our medium be a badass and defeat it all during the scene. The mechanics were in there but never used. Even if we were able to blast or slow the Maw a few times it would have been nice to see in the mix. Instead, we just use them to bring electronics to life in the real world and clear out hazards in the spiritual one.

Lastly, and this is a mixed bag, comes down to the Dual Reality portion in The Medium. In this instance, I will be harping on when it came to the cinematics. While the scenes did a good job of showing where we should be focused when these scenes fire off, my eyes and attention always seemed to hop between the two screens just to watch what was going on. Sometimes with nothing more than the characters interacting with nothing or a different angle of them struggling in the other realm. It felt like it missed the mark on this half of the coin and I felt pulled out of the story of The Medium many times given the lack of focus I felt I could give. It was like watching two different TVs with a video at two different places in the showing and it because increasingly harder to follow along. On the flip side of the coin when it comes to the Dual Reality system, as a gameplay mechanic in The Medium, it worked extremely well. Almost to the point where it felt weird when the portions of the game did not have them active. Not only did we have to worry about the movement between the two as a puzzle, but sometimes we had to navigate puzzles between the two and it was an interesting idea to go through. Even when we had to leave our own body to be able to shift over and handle something before being forced back to the linked soul. Even just being barred off from an area where the real-world had no barrier and we had to worry about being swarmed by spectral butterflies. It sounds odd, but it worked extremely well in The Medium as a core mechanic.

Given how well it mixed into all of the above, the level and area designs in The Medium not only played in well with the mechanic but also gave off the terror and otherworldliness it felt like we should have here. I honestly think there were only two specific locations that showed up in the game that felt a little out of place but were needed for the story to progress. The rest blended the two extremely well and made me want to explore more than I did. It felt like there was story and reason behind it all besides "video games" here. All of which is doubled with the fact that it had to carry over to both realms and still feel like it made sense. Sure, the team has shown that they have the talent to do that in their past titles, but it felt like it shined here most certainly once more.

Wrapping it all back in, and while I did have issues trying to follow along, the story told here in The Medium was a dark and interesting one to enjoy. I will not spoil anything for it but it had the proper beats and very rarely felt like things were forced just to keep it going. There was an emotional rollercoaster that Marianne was on and we were perfectly taken on it with all of the horrors and Sadness it brought. So well that I went back to force through the scenes where the screen split so I could fully understand what this medium was going through and led to the conclusion we all have with it. Although, I will say that there might need to be a content warning for some out there that might have had similar traumas that Marianne and cast went through, because it hit hard here a bit more than I expected. While the core mechanic that was sold for The Medium felt like it was used at some inappropriate times, it worked as a core game mechanic and did not hold anything back from flowing. I do think that we could have used a little more in the way of combat or aggressive sections in the game, I understand the choice not to as this was not an action game. It just felt like an odd choice to allow us to be able to use them whenever but still only give us specific things to use them for. More so when it came to the bigger enemies out there. Maybe this can be improved upon if there is another in The Medium line. No matter the case, I do have to say that it was a fun story and experience to have. If you are looking for a new take on a horror genre, you will enjoy it and not have to worry about clunky mechanics slowing down that fun. There is enough gameplay mixed in to make this not just a walking simulator and thus keep us engaged in the story more than just getting to the next set-piece.

The Medium was developed and published by Bloober Team for the Xbox Series X and PC on January 28th, 2021. A PC copy of the game was provided by the publisher for reviewing purposes.