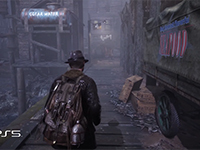 I had a feeling it was only a matter of time before we saw The Sinking City make its way over to the next-gen systems in one way or another and it looks like February 19th is going to be that day we see it happen. Well, at least the day it will happen for the PS5 owners out there. Also, for those owners out there that are looking to buy this version completely as Frogwares is not able to offer the upgrade for the PS4 users that want to move The Sinking City over to the new console there too. It is a weird story for it all, but at least there is an option coming that we can think about taking advantage of if we so choose.

For those not in the know, there have been some legal battles going on for The Sinking City and you can look those up if you want to dive into it all. It seems that this is why we will not be seeing the free upgrade that will let the game run at 4K natively at 60 fps. All of which with faster loading times, something that bothered me in my first play, and the inclusion of DualSense features. While the trailer here does make The Sinking City look a little nicer than the previous version, I am not seeing a full reason to throw down for the game a second time here. It is a great title and if you have yet to play it, this should be the version to get. I am just going to hold out hope that we will see a free upgrade out there in time and then jump back into the horrors that wait one more time.

The Sinking City on PlayStation 5 offers the following improvements:

Frogwares unable to offer a free upgrade from PS4 due to legal issues.

Do you think that these upgrades for The Sinking City are enough to make a full second purchase or will it just be a good bonus for those who missed out before? What do you think will be added in for the DualSense support here or will it be more of the basic things we would expect at this point? Do you think we will ever see this update get placed out for free to those that purchased already or will the legal fight keep it barred forever? Give us all of those thoughts down in the comments and then feel free to discuss it all as you wish. If there is more for The Sinking City, you know we will have it all here. Be sure to keep checking in for all of that and much more.