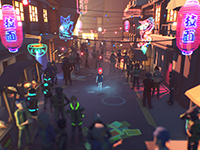 A new third-person title, Binary Smoke, is announced with Binary Smoke giving us all one more sci-fi action-adventure to add into the mix

Add another PC gaming announcement out there for us all with Binary Smoke coming our way on the PC. This would be the upcoming title flowing to us all out of Outside Game Studio that will offer us one more way to look at the future. A heavily Sci-Fi future where humanity has created sentient digital lifeforms that somehow spawn some supernatural powers. It seems like a little bit of an odd thought to have for a game like this, but that is the short description of the story for Binary Smoke as it all stands. Maybe there will be more to it all after it launches, but that is what we have to go on for now.

Well, not the only thing we have to go on for Binary Smoke as we do have a nice little trailer to go with it to. Something that looks to give us a little more of that story summary and also a little bit of the actual gameplay we can expect. Gameplay that looks like it will be giving us some basic movement and "platforming" aspects to use in the mix. I think we also get a little look at how the supernatural powers get mixed in too, but it is hard to say with the art and style of Binary Smoke if that is the case. I mean, what constitutes a supernatural power or a digital power that can come from how these beings came into existence? Or, is that the deeper meaning to it all?

Binary Smoke is a 3rd person, story-driven, sci-fi action-adventure game. It is the Future. Science has reached the advent of The Digital Singularity. Humanity's ultimate achievement is the Binaries, sentient digital lifeforms who possess incredible supernatural powers. In Binary Smoke players assume the role of a rogue Binary in a living city full of colorful characters and dangerous villains. Rebelling against the ruling class, players will inspire a revolution to change the course of their lives forever.

What thoughts do you have about Binary Smoke based on all of this and does it look like a title that will be added into your mix? Do you think that it will help define the difference between the digital and supernatural elements or will it be blurred forever? Do you think there will be a deeper meaning to it all or will it just be a fun title we can power through to say that we did? Give us all of those thoughts down in the comments and then feel free to discuss it all as you wish. If there is more to share for Binary Smoke, you know we will have it here. Just be sure to keep checking in for all of that and much more.