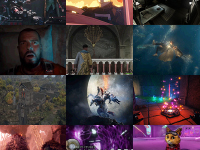 We had another short week of video games on our end, and that is on us and not that there was not much to talk about this week. It happens and we are going to see it happen next week with the American holiday kicking in and slowing things down. That is why we should be thankful that we had what we did for The Callisto Protocol, Marvel’s Midnight Suns, and Crisis Core - Final Fantasy VII - Reunion as we did this week. All video games that will be launching out there shortly after the following week at that. Even if there are more and more looking for Hogwarts Legacy to drop soon too. I guess it is good we got that all out of the way as soon as we did here.

With all of that said, we can now look at next week and the various video games we are going to be able to cover. It will also be a bit of time before we will be taking the steps to get fully caught up. Those reviews we have mentioned will be up there next week and most likely on the days when the studios have taken a break to spend with their families. Not that we are not going to do the same, but we will just have the time to focus since most of these video games will not have anything beyond a few social posts and not much in the way of updates. We do need to get these things out there before the big shopping season too, so the timing works out for all of us. Just be sure to keep a close eye on the site for all of that.