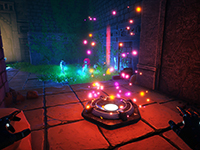 The reveals and bits of gameplay for Matcho we have had in the past have all been leading up to this. Well, at least this next big bit that FiolaSoft Studio is willing to share with us. All of it is leading up to the full release of the game next year for the PS4, PS5, Xbox One, Xbox Series X|S, and PC. It would be weird if that was not the case. No matter the case, though, we have one more massive look at the gameplay for Matcho to break down the basics of the game and then show off a massive story mission in the game. Not one that will spoil much beyond the humor and fun that the game is going to be bringing us all.

Most of what we get to see for the gameplay breakdown is what we have seen for Matcho before. The insane FPS style of games like DOOM but with the family-friendly game of match three added on top. We do get to see a better version of one of the boss-style enemies we will have to bring down where we will have to weaken it by matching two other "bugs" with one of the protective shields on it. All link up to a specific color that we can grow to a larger size before detonating if we so choose. Not to mention, in the story segment that it looks like Matcho will also house some extra stealth sections and parkour in the game than we thought was there. Even if the protagonist treats it all as if he is writing the game's script as it goes, which will lead to some of the combat no matter how we go about it.

Dive deeper into the story and combat of Matcho — the first-ever action-adventure match-3 FPS — in the brand-new gameplay trailer.

The newly revealed gameplay trailer starts where the first gameplay video ended. This time, however, it’s all about showcasing the match-3 FPS mechanics in action, demonstrating some of the tips and tricks on how to effectively get rid of the alien bugs threatening protagonist Max and his friends. Using the environment, dynamic movement, quick thinking, and planning ahead will be the key to Max succeeding in the fight and saving the general.

Matcho is coming to PC and consoles in 2023.

Is it nice to know that we assumed correctly on some of the gameplay from the past for Matcho or were you set on learning something vastly different? Does it feel like things could be overwhelming with the pacing of the game or will it just have a learning curve we will have to get over to be able to do what we see here? Are you excited to see how the story plays out or will this style bother you more than you think? Go ahead and let everyone out there know what you are thinking down in the comments and then feel free to discuss it all as you so wish to do. When we have more for Matcho, you know we will have it all here for you. Please keep an eye on the site and our socials to keep up with it all.