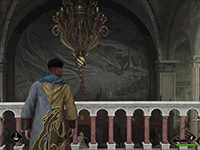 Get your wizarding robes pressed and ready, as it is time to take a long stroll around the gameplay for Hogwarts Legacy. A very long stroll with Avalanche Software as they take us through various gameplay elements we can expect to see when it hits us on February 10th of 2023. Things like how we will craft our own character, get to explore the world of Hogwarts Legacy, and then the combat we will be pulled into in the game. It is an action-adventure style of game out there so we should expect a good mixture of all of that. Even if some of it just feels like it is par the course for these titles as of late.

In this new forty-five-minute video for Hogwarts Legacy, we get to start off with crafting our own witch or wizard in the standard way we have seen many times before. All of the fun options to make the character look as close to a fifth-year version of us in there with many more to come by the time the game launches out there. We do get to see some of the more advanced options that some games have been putting out there with character audio, but so far it is nothing overly mind-blowing. Not that a character creation system usually is when it comes to video games. It is just nice to see that Hogwarts Legacy is giving us many options to play with.

The footage also gives us a nice new look at Hogwarts in general and then we get to move mostly around the castle and many of the rooms out there. It is nice to see how much care has gone into recreating it all and it looks like there is much more to it all than we could imagine. Thankfully, from a gameplay side, it sounds as if we will be goaded to actually explore the grounds in a story side and player side push out there. We will have a special book, AKA Game Journal, that will have us trying to play catch up with all of the others in Hogwarts since we are a little behind. More or less, the mission and side questing systems to keep us engaged but in a way that feels correct for the world and settings.

Then we have the combat in Hogwarts Legacy. It was not expected to be anything that was an over-the-top kind of affair in the mix with us casting spells and trying to survive out there. All of it looks to be a on cooldown system and hotkey casting. With the added mix of having colors of spells and character halos to indicate how we can defend or attack our opponents to the best of our abilities. It is a good thing that we will have many options to do this in the safety of Hogwarts for practice since it feels like it will be a bit more chaotic once we head out to the rest of the game.

In this gameplay showcase, our hosts will take you through a deep dive into the character creator, a small tour of Hogwarts Castle, and an introduction to combat.

Are you excited to see all of these options we will have and the areas in Hogwarts we will get to explore? Do you think that the combat will be a bit more fluid than we think or will it just be a button press with timing to make sure we attack and counter correctly? What aspect of the castle do you really want to get into here and will we get to see the darker sides of it all along the way? Give us all of that feedback in the comments below and then feel free to discuss it all as you so wish to. We will keep the news for Hogwarts Legacy rolling out there, so please keep checking back in for all of that and much, much more.