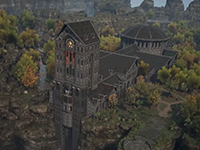 The team over at Firaxis Games has been talking and teasing it for a while now, and here we go with a look at The Abbey in Marvel’s Midnight Suns now. This will be the main hub we will spend a lot of time in when the game is in full swing. All of our mission prep will be done here, character upgrades, customizations, and other friendship activities too. All so we can make sure our Midnight Suns are up for the fight and fully geared up for it. There is also the option to lose ourselves in just making the whole place look our own way when it hits on December 2nd for the PS5, Xbox Series X|S, and PC.

It is mostly glossed over in the following trailer for the Abbey in Marvel’s Midnight Suns, but there is much more than we thought going on in these little sections. Things like us getting to play matchmaker in a few instances, doing silly side activities like Bird Watching or Painting with Ghost Rider. All of which to build up a solid repertoire for extra character synergies and actions in the missions. We are not going to be able to max them out with each in Marvel’s Midnight Suns, so that just lends to us getting to experience it a few times over instead of just a one-and-done. Have a look below and then, if you have the time, have a look at the longer Livestream that we have to go deeper into it all more.

Welcome to the Abbey, your home to live among the legends. But like most things, there’s more to this place than meets the eye…

Launch your epic adventure among Marvel’s Midnight Suns on December 2, 2022.

Pizza with Nico? Poolside with Blade? The Firaxis Games team will show you all the ways you'll live among the legendary Midnight Suns!

Is the Abbey about what you expected for the Midnight Suns to play around in or is there much more going on than expected? Is it odd to have us looking into romantic things for some characters or is that something you all want more of in the game? Will we have too many things to upgrade and take care of in the game or will we be able to ignore the parts we do not like but keep moving forward? Tell us all down in the comments and then feel free to discuss it all as you so wish to. More for Marvel’s Midnight Suns will be coming soon, so please keep checking back for all of that and much, much more.