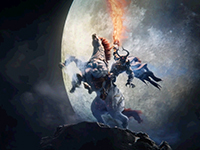 There we so many shocked out there when the announcement for Crisis Core - Final Fantasy VII - Reunion hit the world and there was a lot of thought that it was just going to be a basic remaster and nothing more. It would give us all something to do while Square Enix wraps up the other Final Fantasy games they have in the works while keeping our systems going a bit more on December 13th. Not to mention keep us in the Remake mindset that we have had and still wait for more updates on. We would be correct on some of these, but it looks like there is much more going on under the hood for this title when it hits the PS4, PS5, Xbox One, Xbox Series X|S, Switch, and PC. So much more than we could have thought for a basic remaster.

In general, Crisis Core - Final Fantasy VII - Reunion is a bit of a remaster with HD visuals and fully recreated models for us to experience in the game. All of those have been completely overhauled for the game so it is much more than just slapping on new textures and a few more polygons. Then we have the updated gameplay and combat mechanics that fall a little closer in line with the current state of the Final Fantasy titles out there. All wrapped up with some massive new summon animations and the game having a fully voiced version of the English and Japanese versions of the game. You can get a taste of what that is all going to feel like just a little lower down. It is all feeling like it will be the nice little distraction we need until the next massive announcement the studio will be dumping on us.

Were you expecting just a fresh coat of paint from the previous version of Crisis Core or does the Final Fantasy line require more now? Will this be the official prequel to the remakes we have had so far or just a nice reminder of the story that once was? Will this all lead to the next big announcement for the IP or will that drop the same day the game launches out there? Tell us all of your thoughts and theories on this down in the comments and then feel free to discuss it all. We know there will be more for Crisis Core - Final Fantasy VII - Reunion, so please keep checking back in for all of that and everything else we can find to share with you out there.