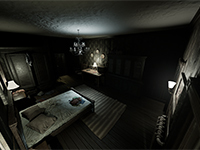 It looks as if there is going to be a little more of a wait now for Do Not Open, at least as it comes to the digital side of the game. Those looking forward to this experience might have noticed that it is not out there on the various platforms that Nox Noctis had it all set for. That is due to the fact that the digital version of Do Not Open has now been delayed to November 25th now. The same day that the physical version of the game will be out there too. An interesting change, indeed, but thankfully, the delay is only going to keep everyone on the same footing for it all.

The reason for this delay for Do Not Open is not given out there, but if I had to guess, it came down to the platforms it was released on not being able to meet the digital release window. Given that the physical version should be sliding out there to shippers any day now and that is where the bigger time change would have to come in if every version of Do Not Open was going to have to wait. We will only have to wait and see for all of this, though. Maybe it was to keep potential spoilers hidden in the mix too, but that does not seem the case for many of the smaller titles as this one is.

Do Not Open — PS5 Release Date

Nox Noctis is delighted to announce the PlayStation 5 version of the award-winning horror game Do Not Open, will release digitally on 25th November. There will also be a Physical Edition, which will be released on 25th November across Europe, with the USA physical release coming in early 2023. The PlayStation 5 version will be digitally and physically published by Perp Games.

Do Not Open is a disturbing survival horror, influenced by escape room mechanics.

Under immense pressure in a terrifying and oppressive environment, Michael J. Goreng, an infamous zoologist, and epidemiologist is trapped within a warped version of his own house. His wife and daughter are in severe danger. Escape the house whilst dealing with a mysterious paranormal threat, stalking you. The pressure is intense as a clock ticks down to zero. The clock stops. Hurry! Solve, Hide, or Die!

Were you wondering where Do Not Open was on the stores or did it slip your mind it was launching out there this soon? Will it matter that you will need to wait an additional ten days now or will that work out with the timeline that most of us have for our gaming needs? Will this affect the PS4 version that is still slated to hit us in 2023 now or will we even notice that since it is a whole year they gave us to look at? Tell us all of your thoughts about this down in the comments and then feel free to discuss it all as you so wish. When we have more to update for Do Not Open, it will be shared here for you. Please keep checking back for all of that and everything else we have along the way.