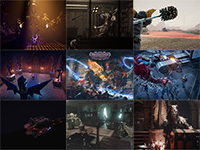 Here we go and wrap one more week in all of the pits of video games out there with all of the releases too. It was a huge week for titles like Resident Evil Village and Pathfinder: Wrath Of The Righteous, but also so many other titles too. Hells, we had a lot for Hood and one last update for the coming episode for Final Fantasy VII Remake too. All to keep us going until today when so many other video games dropped or had massive updates to enjoy in the mix too. Something that has always been odd in the past with build-up towards the bigger conventions that we are not going to be seeing again this year. I guess that is a good thing that has come out of all of this too.

Now that we have all of that out there, we can look to some of the other video games coming soon too. In both the traditional and VR settings of it all too. In fact, we should have multiple reviews out there next week along with all of the other major news that can come about it all too. That is also not to leave out the fact that we have a lot of other titles here for a few video games that are in an early state or just allowing some to dive in now for a few days of a head start. This does allow for us to try to plan a bit more to make sure we can get more out there with a bit more swiftness than expected. That or you can just keep skipping down to the video and basic information we normally get to share.