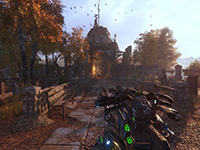 If you have been patiently waiting to see when Metro Exodus will be getting all of those raytracing and next-gen enhancements, then you will be waiting just a bit longer with the date of this set down for June 18th. No, there was not a delay or anything but we just wanted to make it clear that there will be a little more of a wait as 4A Games gets it all set for the PC gamers as well as the PS5 and Xbox Series X gamers too. That is also right, Metro Exodus is getting all of those sweet upgrades on the next-gen consoles too for those that have been waiting to head back into the game with all of the sweet hardware upgrades we have fought and paid for since it first launched. Now is the time to get yourself all hyped up for it all.

You can see some of it all flowing below, but in this upgrade for Metro Exodus it will bring the textures all up to a nice 4K resolution so we can run the game in that mode without much of a loss. Something that will be needed to go along with the raytracing and 60fps that the game will be able to do too. Not to mention the other little bits like faster loading and a few little things for the DualSense controller for those on the PS5. All of which with the added bonus of being a free upgrade for those that have already picked up Metro Exodus on the various last-gen platforms or upgraded to a PC that has a video card capable of doing all the heavy lifting here. You already paid for that price of entry, so why should you have to do it all again, right?

We are excited to announce that Metro Exodus will come to Xbox Series X|S and PlayStation 5 on June 18 2021.

Utilizing the power of these new consoles, we have been able to include 4K, 60 FPS, Ray Tracing throughout (including Ray Traced emissive lighting as pioneered in The Two Colonels), Field of View options, and platform-specific features such as spatial audio and controller latency improvements on Xbox, and support for the haptic features of the PlayStation 5 Dual Sense controller.

This will also be a free upgrade for current owners, but for those of you who haven’t taken the leap into our gorgeous post-apocalyptic world yet, we will also be releasing a physical Metro Exodus Complete Edition for Xbox Series X|S, Xbox One and PS5, which will include the main game and all expansions in one boxed package. Check with your local retailer for pre-orders and pricing details.

Will you be heading back into the Metro now that it can be done with all of these upgrades? Do you think that the lighting will be as dynamic and fluid as we see here or is this the best that a high-end PC can do with the consoles being downgraded slightly? Can you truly see the differences here or is some of it a bit of a buzz for those that have the latest and greatest out there already? Give us all of that feedback down in the comments and then feel free to discuss it all if you so wish to do so. If there is anything further to share for Metro Exodus before this update drops, we will share it all here. All you have to do is keep checking in for all of that and much more out there in the world.