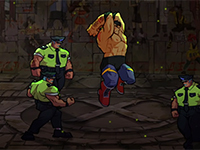 More DLC is seeing the light of day for Streets Of Rage 4 with the latest we have to look at for the Mr. X Nightmare bit that Lizardcube is bringing us all. All of which will be hitting the PS4, Xbox One, Switch, and PC at the same time so there is no worry of things getting shifted around per different platforms. not that Streets Of Rage have done that already, but it is a nice little thing to note here so you know better if you did not. That and the fact that we have a look at Max Thunder joining in with all of the wrestling techniques to drop on all of the various enemies we will soon be encountering as we let the rage carry on in these streets. That is how this is all going, right?

This would be the second extra character for Streets Of Rage 4 that we have here and it looks like Max will be coming with a special Survival Mode in the mix when it does drop later this year. Something that will only get a little more highlighted by some other additional content that will be coming to the game at the same time, which has not been given any full description as of yet. We do have a nice little look at how Max will be smashing things up in Streets Of Rage 4 when this DLC does drop. Something you can have a look at for yourself if you turn your gaze down just a bit. If you have not just skipped on down to that content already to get teased and dive right in already. Have a look and enjoy.

Streets Of Rage 4 DLC: Mr. X Nightmare is adding three new playable characters and a special Survival game mode later this year on PC, PlayStation 4, Xbox One, and Nintendo Switch. A separate free update is arriving alongside the DLC on all platforms with additional content.

Mr. X Nightmare includes lively new original music from Tee Lopes, a composer, and arranger previously featured in Sonic Mania, League Of Legends, and Monster Boy And The Cursed Kingdom among other titles.

How do you feel about this new character that is joining in on the Streets Of Rage? Do you think it will add a vast variety to the gameplay or will it still be the same beat-em-up we have had so many times already? Who do you think will be that third character we have teased here and when do you think it will all hit the market out there? Let us all know down in the comments what you are thinking and then feel free to discuss it all as we always try to do. When we have anything else to share for Streets Of Rage 4, know we will have it on the site for you. Just be sure to keep checking in for all of that and everything else that could be going on.