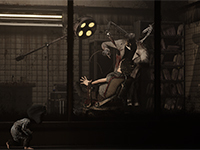 More horror is now coming with the latest announcement for Broken Veil. This would be a new 3D-Puzzle and Platforming title coming to us from Sinsitrum Games that will bring us all kinds of new horrors. Not only through the styled look of the game but through something a bit more realistic in the mix of things. That being that the protagonist of Broken Veil will suffer from Prosopagnosia. Those not looking to do a quick search can read that as face blindness. While it may not be as realistically depicted in this PC game, it does look like the team is trying to convey some of the fears that could come along with it. That and all of the other twisted things we can normally experience when it comes to any horror game out there. All of the greatness mixed into one thing if it can get funded.

As mentioned above, Broken Veil will have us controlling a scared young boy that suffers from that form of blindness. They are searching for their mother after the collapse of the Soviet Union. Given the different way that they see the world you can see how this setting mixed with all of that can lead to some terrible imagery in their head while moving about the world. It does not truly explain the otherworld weird creatures in the mix for Broken Veil, but maybe that will be explained along the way in the core story that we get to experience. Have a look at the small teaser we have for the game here to get a feeling for it all and then we will have to wait to see how everything pans out for it in the longer run. Who knows? This could be a sleeper hit as other titles in the same vein have been over the last few years.

Experience a dark and mysterious post-Soviet Russian town through the eyes of a small child as he searches for his lost mother in Broken Veil, announced today by Russian developer Sinsitrum Games. This 3D puzzle-platformer will keep players on the edge of their gaming chairs with its horror and survival gameplay when it heads onto crowd-funding platform Kickstarter in late Q2 ahead of its Steam release later this year.

Broken Veil tells the story of a scared young boy searching for his mother following the collapse of the Soviet Union. Highlighting the struggles of those with Prosopagnosia (face blindness), Broken Veil’s young protagonist cannot easily recognize and distinguish facial features. His condition ensures that Broken Veil is no ordinary horror game, as Sinsitrum Games uses the uncertainty of his condition to pack its platform puzzles with terror in an ever-evolving gameplay experience. Gameplay will also be enhanced by offering players help in the form of cats that can solve puzzles, traverse unreachable spaces, and calm players down when the atmosphere gets too tense. Players must learn not to let their fears get the best of them as they run, hide and solve problems within the unfamiliar locations they find themselves in.

The uncomfortable and terrifying surroundings of Broken Veil focus on a small provincial Russian town in the middle of nowhere. Sinsitrum Games has drawn upon its familiarity with the era to create an authentically stylized landscape that will pay homage to the distinctive post-Soviet feel of a small rural town in the world’s largest country. Apartment blocks, abandoned construction sites and a dilapidated orphanage all hide more than meets the eye. Are you brave enough to find out exactly who, or even what, lurks within?

Broken Veil is available now for players to wishlist on Steam. The game will be playable in English and Russian at launch.

What thoughts do you have on Broken Veil as it stands here and do you think it is going to pay off at the end of it all? Do you like their take on the condition here or could it be painting things in a terrible light for those that are afflicted with it? What do you think will be the explanation for these other weird beasts out there or will it just be a vast bit of literary license being taken here to make for a better game? Let us all know down in the comments and then feel free to discuss it all as you so wish to do. We will keep our eyes on Broken Veil as it develops and will share everything that we can with you. Just be sure to keep checking back in for all of that and much, much more.