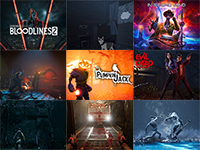 That was one exciting week we just had there and with all kinds of fun updates and announcements for some various video games out there. We saw Bloodlines 2 get pushed out until whenever now, but we had a look at Returnal and Evil Dead to help with that. That and so many release announcements and upgrades for video games like Final Fantasy VII Remake and Watch Dogs too. All of that and the review for Pumpkin Jack as it hit the PS4/PS5 this week. Not too shabby as it could have been out there.

We are hopeful that we will see many of these kinds of updates and announcements for next week, but we also know there were a few things that we did not have a chance to get to this week too. Expect to see all of those video games get their highlight next week in the mix of everything else. That and we have a few more reviews we are hammering out that we will be able to share next week too. Sadly, we cannot even say which yet but we will try to have them out before the video games release during the week and beyond. It can be a tough job, but someone here has to do it.