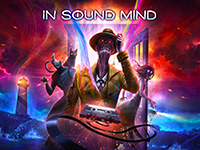 It may not be major news, but there is a new update for In Sound Mind that will pull the attention of some of the gaming base out there. The game is now heading to the Nintendo Switch when it launches. This adds one more option to the growing list of the PS5, Xbox Series X, and PC that we already had. There is still not a specific release date set down for In Sound Mind to launch as of yet, but I have a feeling that might not be that far off to be announced. It is just nice to know that there will be more options when that all does happen as the rest of this update will offer up.

In addition to this announcement, we also have a new bit of artwork for In Sound Mind that can be seen above. It is nothing major and just a bit of artwork to help sell the look of the game here and most likely will be something close to the box art. The other announcement to go with this is that there will be a Deluxe edition of In Sound Mind to pick up that comes with the game's soundtrack. A soundtrack that is composed by The Living Tombstone to add some haunting tracks into the mix. You can get a bit of a sample of this above to help you better decide if you are going to be throwing out a little more to pick up this version of the game.

The Living Tombstone - A Doll's House (In Sound Mind OST)

Modus Games today announced that In Sound Mind, the upcoming reality-bending psychological thriller, will be creeping onto the Nintendo Switch along with the previously announced Xbox Series X, PlayStation 5 and PC platforms. In addition, the game will receive a Deluxe Edition at retail that will include the game, the digital soundtrack by The Living Tombstone, and a digital artbook. The Deluxe Edition is available to pre-order for PlayStation 5, Xbox Series X, and Nintendo Switch for $39.99 USD. The digital standalone game will be available for $34.99 on all platforms.

The announcement is heralded by new game art also revealed today. Players can check out the demo on Steam to get a glimpse of what is in store in the full game experience or listen to ‘A Doll’s House’ on YouTube to get a first listen of the haunting music being composed by The Living Tombstone for the game’s official soundtrack.

In Sound Mind is a first-person horror experience that pits players against the unpredictable dangers stirring within a series of individuals’ memories. Created by the team behind the legendary Nightmare House 2 mod, In Sound Mind twists seemingly simple recollections into shocking encounters with terrifying threats, unbelievable scenes, and a mysterious talking cat for good measure.

Will you be looking to play In Sound Mind over on the Switch or will you be going for the game on the other platforms? When do you think we will see the final version of the game out there? Do you think that this soundtrack is going to give us the proper horror feeling in the game? Feel free to let us know your thoughts in the comments below. If I find more to share for In Sound Mind, I will share it on the site as soon as I can. Please be sure to keep checking back in for all of that and everything else the team has to offer here.