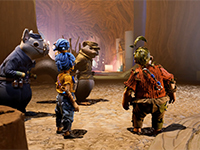 Back when It Takes Two was first revealed to the world I was a little lost as to what was going on in the game. At least outside of it using the same gameplay style as other titles that Hazelight has put out over the years with Co-Op being a huge portion of it all in the first place. Also the fact that only one person needs to buy It Takes Two for the Co-Op play to go down on the PS4, PS5, Xbox One, Xbox Series X, and PC on March 26th. The usual things with the Friend's Pass that was an interesting thing to add into the mix. Thankfully, we now have more to the game in the terms of gameplay and story so we can better gear up for the release of it all and then figure out who we might be splitting the game's cost with.

The following video for It Takes Two gives us a bit more on who the core story of things fires off with a broken marriage and a kid using some kind of magic to force these adults through a story to try to save the marriage. All with some close metaphors to what is going on in the world. That and force them to be a team one more time and build up relations as they make their way through this odd and whimsical world that have been made. All of which feels like a story that is going to have It Takes Two hitting home a lot harder for many gamers out there given the state of the world in general.

As it comes to the actual gameplay, it looks like there will be many different ways that the duo will have to use their weapons and extras to help the other move about the world of It Takes Two. Something that one player will be able to control and thus make life easier or harder for the other player depending on the roles they take. One instance shows a gun setup where one fires flammable honey and the other can ignite it with a match gun. Then there are others where each have a different polarized magnet with each needing to make use of it to solve puzzles and move about the levels. All just more metaphors we will see as It Takes Two unravels out there. Have a look at it all below and get ready to watch the month fly by until we can team up to play it all.

Get a look at the innovative co-op gameplay of It Takes Two narrated by Josef Fares, game director at Hazelight.

Grab and friend (they join online co-op for free with Friend’s Pass!) and play It Takes Two on March 26, coming to PlayStation 4, PlayStation 5, Xbox One, Xbox Series X/S, and PC (Origin, Steam).

About It Takes Two:

Does this change any of your thoughts on how It Takes Two is going to play or does it give you a better understanding now? Do you think that it will all be as dynamic and different each time you play or will it only be based on the two different ways you will be able to play here? Do you have a feeling that this will all play out in the worst way possible for the story or will it be a redemption story for marriages that hardly ever happen? Let us all know your thoughts down in the comments and then feel free to discuss it all as you will. If there is anything else to share for It Takes Two, we will add it to the site for you. Keep an eye on the site for all of that and more.