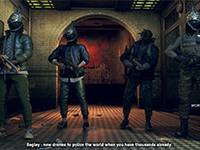 On March 9th the wait will finally be over for those looking to take their copy of Watch Dogs: Legion online and play with some of their friends. It may have been delayed a bit since it was first announced, but it looks like Ubisoft is making good on those claims with the mode hitting all of the platforms the game is currently on the same day and for free still. Even if it does feel like some of the modes in this update will leave some fans of Watch Dogs: Legion feeling a little off or out there. It sounds like it will all be for a better balance and fun, so give it a moment before you begin to hate on it at all.

It looks like this new mode for Watch Dogs: Legion will be giving us a new instance of London to run around in the game with the need to recruit all-new DedSec agents to help us out. My guess is that this is to help things start off-balanced and let us all build up again. Thankfully, it will be in an easier way that will not require various missions and actions to add new members to the roster but just to spend our influence and in-game currency to bring them on. From there, we will be able to take them into various missions with two to four players that will have a varying degree of difficulty and needs. As described in the video, one mission had players needing to do a simultaneous hack on the extreme different sides of the game map. This is where the built-in voice chat should help as it comes with the mode too.

Missions and poking your allies in Watch Dogs again, it looks like there will also be a BattleBot style game mixed in where we will fight Spider Bots against each other for fun and glory. This looks like a free-for-all kind of fight where we will be able to move around and pick up various weapons and upgrades during matches. All to better come out on top for the match and further our growth in Watch Dogs: Legion with our rep and influence. Not to mention dig further into the fact that these little bots are the bigger star of the game instead of the various different characters we can recruit along the way. That is just my hot take on it for now.

Watch Dogs: Legion launches its free Online mode on March 9, giving players the chance to race their friends through the streets of London, take on a variety of intense new cooperative mission types and challenges, or team a dancer up with a beatboxer by the Tower Bridge for an impromptu riverside performance.

Will you be picking up Watch Dogs: Legion again now that things will be going online or has it run the course for you until the next big story DLC drops? Do you like the fact that everyone will be starting fresh out the gate or would you have rather been able to bring over your recruits in general? Do you think that the Spider Bot fights will be the bigger draw here and will it get bigger than expected? Let us have all of that feedback down in the comments and then feel free to discuss it all as you wish. If there is anything more to add to Watch Dogs: Legion, we will add it to the site. Keep checking in for all of that and everything else we may have to offer up.