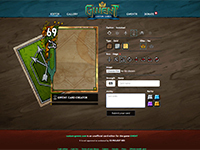 If you are such a fan of Gwent: The Witcher Card Game that even the beta isn't enough to hold you over until the full release then there is a new website just for you. A new site that lets you build your own cards for your own version of Gwent but not the one official one that CD Projekt RED is building for us. You probably just lost a little excitement here but at least this Gwent Editor will allow you to build some custom decks just for personal use or just entertainment. We'll have to leave the official cards just for the developers for now but at least we can pretend now and show off some skills to the rest of the world.

While none of the cards you make here for Gwent: The Witcher Card Game will make it over to the official game, the little web app here does give you pretty much all of the options that come with the normal cards out there; at least as it comes to visual design. You will still need to come up with your own card abilities on your own so it could lead to some very outlandish and unplayable cards out there. If anything, it will let you just have fun while we wait and show off with the rest of the world some of the silliness or awesomeness that your average player can come up with. You'll just have to try and figure out how to sneak those custom cards into your decks without anyone noticing now… Welcome to the Gwent custom card editor! Edit the options on the right side and click "Generate card" to publish and download your very own custom card.

What are your feelings on this Gwent Editor that we have to play with here? Do you think that it will hold us all over until the official game release or will it get boring fast? Will you use it to make your own cards for personal use in your home games or just to show off for fun? Let us know and discuss down in the comments. For more on the official Gwent: The Witcher Card Game though, be sure to stick right here as we get new information we will post it here for you. Hopefully that won't be too far off for now.