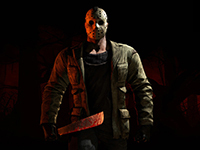 So here we go with even more Mortal Kombat X character reveals, updates, and information. I love that NetherRealm is giving us a flood of new stuff but I wish that it was all at one time. This one though makes sense given the Friday The 13th date and the announcement. If you couldn't tell by now we are getting Jason Voorhees, of Friday The 13th fame, as our first guest character and he will be included along with three other characters in the Mortal Kombat X Kombat Pack. You know the DLC that we will get for buying the Premium Edition of the game or dropping $29.99/£24.99 at some point post-launch.

The other characters mentioned for the Mortal Kombat X Kombat Pack have not been named as of yet but it is stated they will comprise of two Mortal Kombat alums as well as another special guest star. I'm hoping more for Spawn to grace Mortal Kombat X but with all of the other guest character rumors out there your guess is as good as mine. Same goes for the two other Klassic Mortal Kombat characters as the roster has yet to be filled out and we still have so many rumored or mentioned characters to pick and choose from. If anything we can just hope that they will all make it into the huge game that Mortal Kombat X is shaping to be.

Moving right along, anyone how gets the Mortal Kombat X Kombat Pack are also going to be getting the Samurai Pack. This pack will include three new character skins: Ronin Kenshi, Samurai Shinnok and Jingu Kitana, as well as an accompanying skin pack with each playable character. So now we can pretty much confirm that Kenshi and Shinnok will be playable now as it would not be worth the money at all if the character skins only changed the look of the characters during the cut scenes of Mortal Kombat X. I could see that being the case if NetherRealm and Warner Bros. were more money grubbing but I am sure the fans of Mortal Kombat X would string them all up for that. Wouldn't we?

Lastly, and this is a bit of a downer for some, it looks like Mortal Kombat X will only be hitting the PS4, Xbox One, and PC on April 14th. The PS3 and Xbox 360 versions are still coming. They have just been delayed until sometime during the summer of 2015. There has been no explanation for the delay but as it is being handled by High Voltage and not NetherRealm I have a feeling it has to be with the second team not being as fluent with Mortal Kombat X as the creators of the franchise. So it is still coming, those who have not been able to advance in the hardware are just going to have to wait. Hopefully the delay makes Mortal Kombat X just as great of an experience for those last-geners.

I am sure that we will probably be slammed with more announcements and reveals today, as would be my luck, but what do you think about the new info? Glad to see Jason making the leap? What guest stars are you hoping for? Pissed you won't be able to play Mortal Kombat X on the PS3 and Xbox 360 in April? Share your thoughts and feelings down in the comments below.