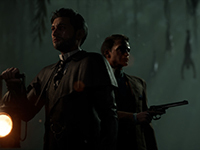 Your brain is not fully breaking, yes, we are getting a whole new version of Sherlock Holmes: The Awakened out here in 2023. It has been some amount of time and not everyone was expecting it from what Frogwares was teasing out there, but a full remake of the game from so long ago is heading to the PS4, PS5, Xbox One, Xbox Series X|S, Switch, and PC when it is ready. All rebuilt from the ground up to use what the developer has learned over the years with their Sherlock Holmes titles and the most recent Cthulhu title The Sinking City. They are just getting mashed right together with a bit more of the story rewrites to make it all flow perfectly.

If you have no idea about Sherlock Holmes: The Awakened before now, it is a title that will blend back together all of the puzzle solving and world exploring of a Holmes adventure, but with more of the madness that comes from the aforementioned elder god. Obviously, this will hold more horrors in it than other titles in the same vein for Holmes and Watson but will move us along in the character's evolution to see how they handle something that is truly supernatural instead of just man-made. It will be interesting to see how the team implements the sanity mechanic here for Sherlock Holmes given how very logical he normally is as a character. Not to mention what else will be altered and updated after the more than a decade since the title first launched.

Sherlock Holmes: The Awakened is a Cthulhu meets Sherlock Holmes detective horror adventure. The game acts as a continuation of young Sherlock’s story with Holmes and Watson undertaking their first major case together.

An Eldritch god-obsessed cult is making moves in the shadows to bring about a world-altering prophecy and it’s up to the young detective duo to thwart their plans. This is a creative take on what horror-filled and reality-breaking events could have met our heroes at such a crucial point in their lives to go on and shape them into the characters we all know they become. Delve into the trauma and fear that cements their friendship for good and the revelations that break Sherlock’s mind to create the flawed and haunted genius he is destined to be.

Originally released in 2006, The Awakened is a full remake and substantial rewrite being rebuilt and redesigned from the ground up to run in Unreal Engine 4.

How well do you think that Sherlock Holmes will adapt to all of the new elements that will be mixed in or could we see him truly go mad? How much of a blending between all of their titles will this be or will it be something that stands completely away from all of them? Why do you think the team is using the UE4 engine instead of the UE5 engine and could this be due to the custom tools they have from the past? Sound off in the comments and let the world know what is on your mind about all of this. We will have more for Sherlock Holmes: The Awakened, so be sure to keep checking back for all of that and everything else we will have to offer up.