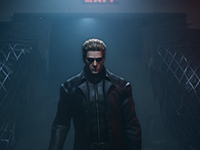 The teasing for the next set of survivors and killer coming to Dead By Daylight continues, but at least we have a bit more on how Resident Evil is working into it all again. This is nothing overly new since Behaviour made the announcement it was going to happen a while ago with the PROJECT W announcement that was made. Now, we get a better look at just what will be hitting Dead By Daylight from that IP sometime soon. Sadly, that is the best we can give for the release of this DLC on the PS4, PS5, Xbox One, Xbox Series X|S, Switch, and PC. Then again, how this has usually gone, I have a feeling we will see it all in a few weeks as a quick and surprise announcement out there.

For those that have been hoping for it, we are finally getting Wesker as the killer in Dead By Daylight with this next update when it comes. He looks like he will be another imposing entity in the growing roster we have had over the years for it all. Thankfully, we will also be getting Ada Wong and Rebecca Chambers added in on the survivor side of it all. I am guessing that they will have all of their badass skills and abilities that have been altered to fit the Dead By Daylight, but anything beyond this, it is up to speculation. You can see this new announcement that shows these characters just a bit below, and maybe it will house some of the actual abilities in the mix.

Dead By Daylight is a multiplayer action horror game where one player takes on the role of a brutal Killer and the other four play as Survivors. As a Killer, your goal is to sacrifice as many Survivors as possible. As Survivors your goal is to work together to evade, escape, and most importantly – stay alive.

Are these the expected Resident Evil characters for Dead By Daylight or did you think they were going to give us all something else? How do you think we will be able to use Wesker to the best of his abilities or will he be more of a skin of something else in the game? Do you think that Ada will have all of her gear in the game or will it be much more limited out there? Tell us what you are thinking down in the comments and then feel free to discuss it all. If we have more to share for Dead By Daylight, know that we will keep sharing it all here for you. Please keep your eyes wide open for all of that here.