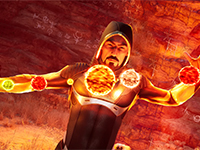 We had a nice tease for Doctor Strange before, and now we get to see him in action in Marvel’s Midnight Suns. We are finally getting into the mystical and supernatural characters with Firaxis Games after many of the basic and currently popular superheroes in the mix. Maybe they are just waiting to give us all the true Midnight Suns roster right before October 7th when the game hits the PS4, PS5, Xbox One, Xbox Series X|S, Switch, and PC. That is neither here nor there right now, and we can just look at how the Sorcerer Supreme will be aiding the team and helping to control the battlefield a bit more against Lilith.

Up to now, the Midnight Suns roster has been all about doling out damage and throwing all of the villains around the map. Doctor Strange seems to be embodying the first part of the name more than ever with the ability to help boost and help the rest of the team more than just damage. Some of his abilities will allow for items to be reused again and allow for others to redraw cards along the way more. That is not to say he cannot do any damage, as one of his strongest cards will allow him to wreck many out there in a massive area of effect, but he is definitely more of a support role in Marvel’s Midnight Suns. Have a look at the new gameplay that goes a bit more granular into the cards and abilities he will have in the game.

They don’t call him the Sorcerer Supreme for nothing. Doctor Strange unleashes otherworldly magic and ancient artifacts to protect the world from Lilith and her forces.

Now that we have the good doctor out there in Marvel’s Midnight Suns, it is time to look forward to the next big reveal coming up. That one being another cosmic character, but not one that we normally have on the comic roster either. Captain Marvel is on the way now to help wreck everything out there and also gets imbued with some of those darker energies too. You can get a bit more of the tease for that just below to see how they are going to get her added into the Midnight Suns team too. Here is hoping we will get Ghost Rider or Blade in the very near future instead.

The sky is no limit for this interstellar slugger!

Unleash cosmic chaos with Captain Marvel when she joins the Midnight Suns on October 7!

How do you feel about this version of Doctor Strange for the Midnight Suns and do you think it is fitting to slot him as a support class? Do you think there will be more damage in the mix along the way or will it all be more support with the rest of the cards? What do you think about Captain Marvel on the way here now and will they be able to fit her in well too? Let us all know down in the comments what you are thinking about the game and then let the discussion flow. More for Marvel’s Midnight Suns is on the way and we will keep it all coming here. Just be sure to watch the site for all of that and much more.