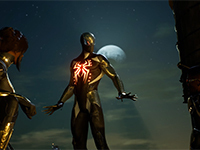 More of the Midnight Suns are being held off here out of SDCC this year with the next character in the upcoming video game getting his own showcasing. That character is Spider-Man, who is not normally part of the core roster, but another one that Firaxis Games is giving us to help save the world from the horrors that are incoming. Now, we have a nice little introduction to Spidie in Marvel’s Midnight Suns and how he will play quite a bit differently than all of the others shown off so far. We do need to get a better grasp on all of it before October 7th when it hits the PS4, PS5, Xbox One, Xbox Series X|S, Switch, and PC.

As you can see a bit lower down, Spider-Man will be adding in a bit of environmental control in Marvel’s Midnight Suns. There will be some various uses of the world and items out there while letting hit have multiple moves and attacks if it is all set up correctly. They are not anything strong, but some will move the bigger enemies around and take some of the lower-level enemies out there. Just as Spider-Man normally can do in the mix of some of the heavy hitters in the Marvel landscape. He will also have his Hellfire form in Marvel’s Midnight Suns that does let him deal out some damage, but it will be on a bit of a cooldown or limitation out there to help keep things balanced a bit more. It is how you try to balance out a character that could normally punch jaws off.

Peter Parker knows that with great power comes great responsibility. So of course he answered the call in the fight against Lilith.

Join Spider-Man and the Midnight Suns when the game launches on October 7.

Sticky situation? Not a problem for your friendly neighborhood Spider-Man! 🕸️

Now that we have Spider-Man in Marvel’s Midnight Suns, we have a look forward to the next character that will be getting a spotlight out there. It is a nice little meeting we have for now, but Doctor Strange is finally getting his time in the sun. One of the characters that are normally attributed to the Midnight Suns team from the comics is finally on the way for us to see. I have a feeling this could be where they all start to flow in after getting the non-usual ones out of the way and showing off all of their skills before. Have a look at the good doctor just below and then keep an eye out for when the full breakdown drops out there.

No matter the odds, the Master of the Mystic Arts always sees a path to victory. 🔮

Join Doctor Strange and the Midnight Suns when the game launches on October 7.

Are you glad to see Spider-Man out there with the Midnight Suns in this form or should he have sat this outing out? Do you like that his normal strength has been limited a bit more or did you want them to go all-out with it and make him overpowered a bit more? How well do you think Doctor Strange will team up with all of the others or will you be able to make him a solo character along the way? Tell us all down in the comments and then feel free to discuss it all. There will certainly be more for Marvel’s Midnight Suns, so keep checking in for all of that and everything else we have to offer along the way to launch.