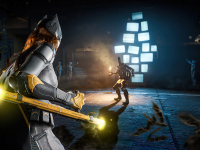 Obviously, out at SDCC this year, we had all kinds of heroes running around and so much news flooding into us for all forms of fandom. Gotham Knights was teased before and we had a massive drop out there with WB Games Montréal offering up a solid look at Batgirl in the mix of the game before October 25th when it hits the PS5, Xbox Series X|S, and PC. Batgirl is not anything we did not know was coming, but now we have the showing of how she will be out there doing what Batman used to do. All along the way to earn her place in the Gotham Knights and become one of the saviors of Gotham and how she will make sure the legacy carries on after Knighthood.

In Gotham Knights, it looks like Batgirl will be using a mix of kickboxing, Jiu-jitsu, and her tonfas in the mix. Even if they do look like they could also be used as nunchaku at the same time too. That is what we get to see here as they do split and have some kind of connection between them that Barbra can use. All of which makes perfect sense for the character from the comics and to keep the tradition flowing still. A tradition that also flows into her special traversal method in Gotham Knights and the gliding that was made popular in the Arkham series of games. Even if this one is not linked directly to them beyond using the same Batman IP out there.

Batgirl is the hero Gotham needs.

Gotham City still has a Bat, and she’s going to make sure everyone knows it. Protecting people runs in her veins and will always be a part of who she is, no matter her identity. The people of Gotham need a symbol to believe in, and there’s no one better than Batgirl to be that symbol.

Warner Bros. Games and DC premiered an all-new gameplay trailer for Gotham Knights, the upcoming open-world action RPG in development by WB Games Montréal. The video showcases new gameplay and custom cutscenes of Batgirl, also known as Barbara Gordon. A highly trained fighter and expert computer coder and hacker, Batgirl brings both brawn and brains to the team of knights. Using her signature weapon, the tonfa, along with a fierce combination of kickboxing, capoeira, and jiu-jitsu, Batgirl can swiftly take down powerful foes twice her size. With dangers new and old on the horizon, Batgirl is more determined than ever to keep Gotham safe and protect the city from falling into chaos.

Do you plan on going all-in with Batgirl when Gotham Knights launches or will you only make sure to keep mixing her in? Does it make the best sense to give her the gliding mechanic here or did you expect that for a different character we have? Does it feel like these are a blending of the tonfas and nunchaku or will it just be one of the extra bat-gadgets the family is always known to have too? Sound off in the comments below and let us all know your thoughts on it all. We have more for Gotham Knights to share with you, including an interview with the voice actors and developers our of SDCC, so be sure to keep an eye on the site to see and hear all of that. You should not be let down by these amazing artists out there.