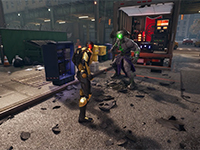 The roster for Marvel’s Midnight Suns is going to be vast and we need to know just who and how they will all function in the game so we can properly bring down Lilith and her forces. We still have some time until October 7th to get that all in line and it looks like Firaxis Games is going to keep the ball rolling with more character bios and gameplay. This time around it is Iron Man who is joining the Midnight Suns team with some big showoff moves and wisecracks that the character has recently been saddled with. Even if he normally is not part of the core team that we get in the comics or have been teased with up until now.

While not one of the normal members of the Midnight Suns, it does look like he will be bringing quite a bit of versatility to the game with a mix of all of the modes of character gameplay. A true jack of all trades, if you will, while focusing on manipulating the deck of cards we will get to play with. Some of these options will get some massive boosts if we have a full hand or if we keep redrawing to boost others. Some of these mechanics in Marvel’s Midnight Suns seem a little odd to be talked about since there has not been one massive gameplay breakdown as of yet, but I have a feeling all of this will feel close to home for those card game players out there that have handled titles just like this one in a physical realm. That or I missed something as they have been pumping out all of these new gameplay videos.

From cracking jokes to cracking skulls, Tony's always got a plan. 💡

Possessing bottomless cash reserves and a brilliant intellect, Tony Stark knows all about privilege. He has the resources to turn any challenge into a success, thanks to his own mind and the wealth from his father’s corporation. After a deadly bomb blast, he even transformed the shrapnel lodged in his chest and threatening his heart into a net-benefit; it pushed him to perfect not only his innovative Arc Reactor, but also a hi-tech suit of armor.

However, Tony is also aware of just how lucky he is…and is even a little conflicted about it. Of all the descriptors commonly applied to him — millionaire, playboy, genius — he’s decided he likes “hero” best. He wants to see his technology reshape the world, but unlike his father, he wants that change to be a positive one.

Iron Man brings his devastating ranged arsenal and unmatched traversal against Lilith’s forces. Hang on to your repulsors.

If you want more for Marvel’s Midnight Suns, then look not much further as it does look like we had another character showcase during the rush of everything else too with Captain America. Not another one that is typically on the supernatural hunting team, but one we have nonetheless. It should also come as no surprise that Cap is more on the defense side of things with the usual tank abilities to dole out some punishment too. All while charging up blocks to unleash right back at the demons that will be stalking the world again. Have a look and then get ready to wait a bit longer until we get the next big showcase for Marvel’s Midnight Suns.

The First Avenger himself, Captain America, has joined the Midnight Suns. Go in-depth into his abilities, playstyle, and tactics with our gameplay showcase, featuring 2K Nextmaker and strategy gamer extraordinaire, Christopher Odd.

Do you like how Iron Man and Captain America are playing in Marvel’s Midnight Suns or is it still hard to understand how certain things are getting built up here? How many characters do you think we will have to play with at one time or will they be capped at the usual four once we get to that part of the game? When do you think we will see some of the core team from the comics get some highlights out there or will they be saved until October? Tell us all of your thoughts on all of this down in the comments and then feel free to discuss it all if you so wish. More for Marvel’s Midnight Suns is definitely on the way, so be sure to keep an eye on the site for all of that and much more.