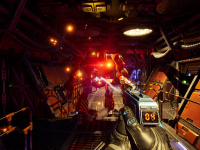 We all knew that SHODAN was on the way back to System Shock with the upcoming remake hitting the PS4, PS5, Xbox One, Xbox Series X|S, and PC in the near future. I do not think it would be the same game out there if that was not the case at all. Nightdive Studios seems to agree and has given us not only a good showing of SHODAN back in action for this System Shock, but also give us the original voice back to drag us all back into the universe and destruction within. While not a total horror, you can feel the terror rising in this game all while taking us all back to the nostalgic state that might have the anxiety running high once more.

In addition to the voice of Terri Brosius coming back as SHODAN in the mix for this System Shock remake, we have a new bit of footage for the game to look at too. Some of which looks like it is fully new and something we have never seen before, but also quite a bit that brings the classic System Shock into a more modern era with the visuals and settings we have hoped for. For many out there, this might look like a traditional shooter with a rogue AI rushing around to kill us all, but that could be further from the truth for those gamers that grew up with this title. I know I am still excited to see how this new version will change things up in the game and bring a whole new class of gamer into the fun many might still remember.

System Shock — From SHODAN With Hate

The exciting new trailer features the returning voice talents of Terri Brosius as SHODAN (Sentient Hyper-Optimized Data Access Network), a malevolent AI hellbent on humanity’s destruction. A wealth of new gameplay scenes are on display in the trailer, as well as the first look at iconic areas fully reconstructed by the talented team at Nightdive Studios.

The new System Shock is a fully-fledged remake of the groundbreaking original, pairing its beloved core gameplay with all-new HD visuals, updated controls, an overhauled interface, and remastered sounds and music.

System Shock is a fully-fledged remake of the groundbreaking original from 1994, combining the cult gameplay with all-new HD visuals, updated controls, an overhauled interface, and all-new sounds & music. Pre-order for PC via Steam, GOG, and the Epic Game Store; it will also be released on PS4/PS5 and Xbox S/X, and Xbox One.

Did you have a chance to enjoy the original System Shock before and can see how many of the classics coming back in? Did you think they would be able to make this game again without the original voice of SHODAN or will we have to give up on all of that at some point? How will this stand out beyond a traditional shooter out there and will the nostalgia be enough to help with that? Dive into the comments and let us all know what you are thinking and then let the discussion flow. We will keep the news for System Shock flowing on the site for you all. Please keep checking in for all of that and much, much more as we march forward in time.