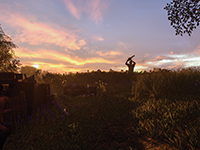 We still might have a bit of a wait for The Texas Chain Saw Massacre to hit the PS4, PS5, Xbox One, Xbox Series X|S, and PC but it does look like the gore and brutality of the game is ready to be on a bit more of a display. That is all based on the new footage that Gun Interactive has let loose on the world here and we are ready to share with you. Before now, there has only been a few still or motion shots showing off the Texas farm we will be trying to escape from. Here we get to see all kinds of ins and outs for the game and just how terrible some of these kills will be if we are the unlucky one catching the business end of the titular chain saw

That all said, we do get quite a bit of running and hiding that we are going to have to do in The Texas Chain Saw Massacre. We also might be seeing how some of the other family members will either be helping Leatherface out or will just be other options for players to use during matches. My money is more on the latter option as the deck is already overly stacked against us in The Texas Chain Saw Massacre that allowing for a few other AI bots or players during the match to help end our lives would just feel unfair. I guess we will just have to wait until 2023 to see how it all unfolds, though. Have a look at the new footage and see if this one will be right up your alley as the team's other titles have been in the past.

The Unrated Cut of the brand new gameplay trailer for The Texas Chain Saw Massacre, a game based on true events, by Gun Interactive and Sumo Nottingham.

Do you think we are going to be able to survive in other locations from the IP or will it mainly focus on the Texas farmhouse for now? Do you think the other killers will just be player options or will they mix it up and allow for multiple killers to hunt us down in the game? Do you think that the survivors should be able to kill the killers in this game or should they always be left to the more innocent side of things in this genre? Let us all know what you are thinking down in the comments and then feel free to discuss it all if you so wish. As more for The Texas Chain Saw Massacre flows out there, we will keep sharing it all with you. Just be sure to keep a close eye on the site and our social accounts to stay as up-to-date as possible.