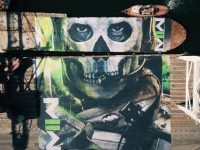 The next Call Of Duty is coming up to us all with a date listed for Call Of Duty: Modern Warfare II

Here we go with the announcement for this year's Call Of Duty entry and it is Modern Warfare II. Not that Modern Warfare 2 from before from 2009 but one that will be a direct sequel to the Modern Warfare reboot from 2019. I hope that clears things up since it seems like Infinity Ward has opted to not focus on original game names but to give us some solid video games in general. As long as this Call Of Duty: Modern Warfare II hits just as well for us all when it lands this year on October 28th. If not when we get a solid update and reveal for it all on June 8th here. All of the confusion out there to me.

Now that we are passed all of that, here is what is known for this Call Of Duty: Modern Warfare II that we have here now. We have a bit of the artwork for the game to look at in the following video and knowledge that some of the iconic veteran characters will be back in this one. Given how it is all going, this is not shocking at all. What would be more shocking is if we find out the following footage for this Call Of Duty is not a real world drone flying around but in-engine footage to show how far the teams have brought the IP. It is a little doubtful, but I would also not be shocked if it was true.

Is it a little confusing that we are getting Call Of Duty titles with the same ones from years ago and should they not try to change things up a bit? Have you always been hoping to get a reboot to this entry into the line or would you have hoped to see something truly new instead? How do you think this is going to be different from what the reboots have given before? Tell us all what you are thinking down in the comments and then feel free to discuss it all as you so wish to. We know we will have more for this Call Of Duty: Modern Warfare II, so please keep checking back here for all of those updates. I have a feeling it is going to hit the ground running as soon as we get the full announcement.