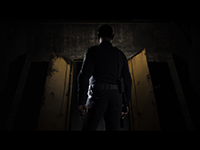 The podcast promotions for The Quarry are still rolling out with the fourth one dropping today with two more to come before the June 10th launch on the PS4, PS5, Xbox One, Xbox Series X|S, and PC for the game. Supermassive Games has been doing some fun worldbuilding with all of these, or at least some fun promotion with them. No matter the case, we have been taking them all in and hoping to get more for The Quarry out of them here. With the latest giving us a deeper look at how female ghosts and vengeful spirits are usually portrayed in these kinds of games and the media in general. All of which is something I hope to see played up in the coming game.

The entire new episode of the podcast is just a bit lower down, but for those looking for the quick recap, it is mostly about how most of the urban legend ghosts out there about some female spirit out for revenge. We have yet to see that specifically in any of the gameplay for The Quarry, but it is a fun piece that wraps up the story of the lost hikers from before, but circles it all back in while explaining the horrible things out there that would cause these spirits of vengeance to keep coming back. I am still on the side that these are set in the world of The Quarry and we could be seeing some of these ghosts and cryptids in the game at some point. Now we will have to worry about the wrath of women that were starved to death by men and are now on the hunt to punish others that do the same. If anything, it is a fun listen to keep the hype train going for the game.

The Quarry — Bizarre Yet Bonafide: Hangry For Revenge

The case of the missing corpse takes an unexpected twist, Grace and Anton explore what makes vengeful spirits so absolutely brimming with venge, and rumored sightings of a hag in Upstate New York's Hackett Woods pique the pair's interest.

Presented by The Quarry, an all-new horror experience from Supermassive Games and 2K, coming June 10. Rated M for Mature.

From 2K and masters of horror Supermassive Games, The Quarry releases June 10 on the PS4, PS5, Xbox One, Xbox Series X|S, and PC.

Do you think that all of these podcasts will be something for The Quarry's world or are they just something to keep us talking about it for now? Do you think we could see all of the supernatural things from these in the game? Is it an interesting take on the commentary of how we view women in the horror setting out there? Tell us all of your thoughts on this in the comments and then feel free to discuss it all if you so wish. More for The Quarry is coming, and you will just need to keep checking in on the site for all of that and everything else we have to offer up.