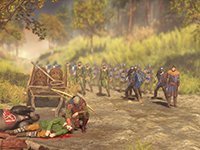 Gather up your compatriots and get ready to set forth upon another massive quest with the announcement of The Valiant. A new title on the way from KITE Games and THQ Nordic that will take us to the time of chivalry once more and set us for on another RTS game for the PS4, PS5, Xbox One, Xbox Series X|S, and PC. That is, at least, as the description for The Valiant claims with an announcement video that shows anything but chivalry in the mix. Unless you want to go all-in on the violence that can come from the codes of honor and the wars that we will fight. That is where I think the game will be going at the end of the day, even if it is not the first thing that comes to mind when the topic is brought up in the first place.

With all of that said, The Valiant is your typical RTS and RPG title from the sounds of it all while being set during a medieval time. One faction out there has become obsessed with gathering up parts of an ancient artifact to do what they do best. That would be to try to force control over Europe and the people out there. That is where we step in within the world of The Valiant so that there is an opposition and champion for the people to make sure the battlefield is filled with all of our enemies. Be it in a single-player mode or the various multiplayer options we have come to expect in RTS games. While we do not have any gameplay for it all yet, you can see the announcement and get a feel for the world we could be diving into soon.

“Thou shalt champion the forces of Justice and Prevail against Evil” is the 10th commandment of chivalry — and what drives Theoderich von Akenburg, the hero of our story. One of his former brothers-in-arms, Ulrich, has become obsessed with re-uniting Aaron’s rod, an ancient and mysterious relic, and is on a reckless crusade through Europe and the Holy Land to find the missing pieces. If Ulrich succeeds, the world will face grave consequences. Theoderich had vowed to never take up arms again, but chivalry forces him to embark on the holy quest to stop Ulrich, gathering new loyal companions along the way.

The Valiant is an upcoming action-RTS with RPG elements, designed to bring a fresh experience to players wanting something new in the genre. Focused on more tactical combat with smaller forces, players encounter a sweeping, story-driven campaign where each mission’s challenge is unique. Decisions both on and off the battlefield count, as players will want to select their forces carefully for each mission (no base-building here!), as well as decide the skills and equipment given to each hero. With three unique skill trees per hero, there are plenty of options to explore when finding the playstyle that fits best, and Valiant’s fast-paced, melee-centric combat will give new challenges to even the most veteran RTS players.

The Valiant also offers two different multiplayer modes: competitive and cooperative. While the game’s campaign is designed as a single-player experience, three friends can enjoy the Last Man Standing mode together and hold their ground against waves of enemies, including mini-bosses and bosses. Success will be rewarded with experience to level up the selected hero, granting new skills and better stats for future challenges. The PVP mode offers 1vs1 or 2v2 scenarios that consist of swift and thrilling clashes as players capture control points and build up their forces. As players earn more victories, they’ll be able to unlock a wide range of visual customization that can be leveraged throughout the game experience.

Gather your forces! The hour of battle is upon you!

Will you be giving another eye to The Valiant as it evolves or will it be another title that gets lost in the mix? How will it stand out from other RTS games out there and will it give some of the mystical to the real-world feel they are going for? Are you already planning your three friends to jump into the game with or will that take a bit of time to convince them enough to do so? Tell us all what you are thinking down in the comments and then feel free to discuss it all as you so wish. When we see anything more for The Valiant, know that we will share it here or on our social accounts. All you need to do is keep a close eye on it all so you do not miss out on a single thing.