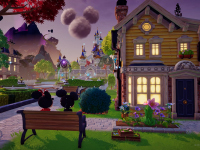 It has been a few weeks since the announcement for Disney Dreamlight Valley and there was a bit to unpack from all of it. This is the next title coming from Gameloft that will take us all into a life-sim and adventure game that will place us deep in the worlds of the Disney IPs. Not specifically anything from the real-world parks or what other games have done in the past, but all in a new way and locations that the teams are making for us. All of which should be fitting and house all of the hidden Mickeys that we could expect out there on the PS4, PS5, Xbox One, Xbox Series X|S, Switch, and PC this Summer. Now we have a look at a few of them and the friends we will be finding within them.

When it comes to theme new biomes we have to look at for Disney Dreamlight Valley, they are nothing too in-dpeth but just enough to give us all a feel for what we can expect. They also look like they will be some of the first areas in the game that we will go to and explore with the Plaza and Glade of Trust topping that list. The one that might be a bit more interesting to us all is the Dazzle Beach, which takes inspiration from Moana. This is what we can look to expect when it comes to the film or show specific locations we have in the game. None of them are longer than a few seconds, so it is hard to get a solid read on anything. That does not remove the excitement that is building for the game at all, though.

Your starting point in the game, the Plaza is filled with incredible resources and tools that will kick-start your journey — as well as some beloved characters who will help you get started.

While our sneak peek shows an idyllic sunset, you'll have your hands full with the Night Thorns that have run amuck. You’ll need to rebuild this once-happy place and uncover its secrets — chief among them being: Exactly HOW MANY hidden Mickeys can you find in the image above?

Remember those glowing lotuses from the Glade of Trust? You can place them in the meadow and they look great at dusk! Many of the items in the game feature dynamic lighting so you can help set the mood for your adventures from dawn to dusk. In this clip, you'll probably notice that quite a few residents have set up homes in the Valley. Maybe you can guess who is at which house based on its unique hat topper!

This area will be one of the first you unlock and it’s filled with a hazy atmosphere and new resources to discover and collect. Visually it’s wildly different than other biomes you'll discover and it brings a truly vibrant feeling to Disney Dreamlight Valley. The biome is also filled with stunning new flora, like glowing lotuses, as well as exciting new fauna, including a certain pink reptile…

If you're a fan of Moana this beach is the place to be. Not only will you be able to go fishing with her, but you'll also be above to help her rebuild her wa’a kaulua. In this clip we also get a glimpse of a mysterious Dreamlight Valley Pillar. Maybe you can unlock its secrets?

Were you able to glean much from these locations with how limited they are? What do you think we will be collecting and doing in each of the areas we have to look at? Which Disney IP are you hoping to see get a massive area in the world to explore? Feel free to let us all know down in the comments what you are thinking. I will be keeping a close eye on all things for Disney Dreamlight Valley, so be sure to keep checking back in for all of that on the site. We will keep putting out everything we can, so check out what everyone else has to offer up as well.