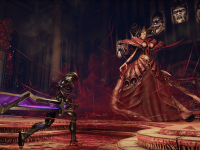 The next-gen update for Hellpoint is on the way to us all along with the DLC of Hellpoint: Blue Sun

Good news for those waiting to get Hellpoint on their PS5 and Xbox Series X|S natively. The date that will be dropping on us to enjoy in just over a month from now. Cradle Games is wrapping things up and getting it out there on July 12th so you can move away from the PS4, Xbox One, and PC if you so want to. Even if the game is a little old for now to be too worried about that. Then again, Hellpoint will be seeing some new DLC drop out there on the same day so there will be something to make it completely worth the download and add to the systems out there once more.

Just as to be expected, the DLC for Hellpoint will be adding in a whole lot of new gameplay and story to take in too. All while gaining new armor and weapons along the way to use in the game. All of that plus some other updates for Hellpoint in the mix too. Like the way to check out the character stats, the ability to respec said stats, and new inventory management options to use too. Have a quick look at what is coming and then mark your calendars for when you can give it all a go with the new 4K and 60fps options on the consoles. I am sure that most of our PCs could already do all of this before this new update and version.

The PS5 and Xbox Series versions of Hellpoint will run in the 4K resolution and 60 FPS with decreased loading times. Launching alongside the next-gen update is the first DLC expansion for Hellpoint: Blue Sun. In this new adventure, the Spawn will delve into strange, never-before-seen locations within Irid Novo, behold the influence of the cosmic gods and discover the true cause of the Merge cataclysm. DLC will also include new armor sets and two-handed weapons, as well as long-requested stats, respec, and inventory management features.

Were you holding out for Hellpoint to go to the next-gen systems or will it just be an upgrade reason to play it all again? How many new armor and weapon sets do you expect to get in this DLC? Will the new missions and story keep us all going for long or will these new gods bring us down to their depths quickly? Let us all know your thoughts on all of this down in the comments and then feel free to discuss it all. If we have more to share for Hellpoint, it will be on the site. Just keep a close eye here for all of that and much, much more.