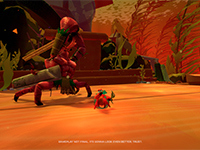 A new soulslike title, Another Crab’s Treasure, is on the way to put us all in the role of a comical crab now

With Soulslike games all the rage out there, it is time to add one to the growing list that looks to have some fun with the genre with the announcement for Another Crab’s Treasure. A new title that will give us all of that familiar gameplay but with an art style that is a bit more cartoonish and filled with some of the comedy too. That is how Aggro Crab is looking to take this title for the PC and Switch when it comes next year. That is a bit of a wait, but when you see how this crab will be moving under the sea, slaying enemies, and upgrading its shell along the way, it looks like it could be worth the wait. At least for those looking to have something that is not all doom and gloom out there.

You can get a look at what Another Crab’s Treasure has for us all at this point just below in the latest trailer we have. It shows off a bit of the new and challenging combat that we will have for this genre. There are also a few of the shells we will have to wear with over fifty of them coming to us all in the end. It is also interesting to see how the crab will use some of the magic in the mix too. That is something that felt like it was going to be a bit off when it comes to the animal here, but it somehow works well. Have a gander and see if it will get you into the genre for once or will be on the pile of other soulslike games you might have already.

The ruff tuff team at Aggro Crab, developers of the satirical dungeon crawler Going Under, revealed their next game today during the latest Nintendo Indie World showcase. Another Crab’s Treasure is a soulslike 3D Platformer set in a crumbling underwater world plagued by pollution where you play as a timid but brave hermit crab named Kril. Another Crab’s Treasure is set to release in 2023 on Nintendo Switch and PC.

Today’s reveal provided a first look at the gameplay and world of Another Crab’s Treasure. As Kril, players will explore an undersea society that has entered a period of garbage-fueled prosperity, and discover the dark forces of industry and pollution placing it under threat. As a Hermit Crab, Kril often changes his shell to suit his needs, and players will find various pieces of garbage of all shapes and sizes to wear as shells on their epic quest.

Another Crab’s Treasure is a soulslike adventure set in a crumbling underwater world plagued by a mysterious curse. As Kril the hermit crab, you’ll need to wear the trash around you as shells to withstand attacks from enemies many times your size. Embark on an epic treasure hunt to buy back your repossessed shell, and discover the dark secrets behind the polluted ocean.

Have you been looking for a soulslike title that puts us all in the role of a crab or is this an out-there idea that will work for the masses out there? Do you think each of the shells will offer up more than armor or will that be the basics of it all? How do you think the magic will flow for our little guy and will it be too odd over time to see that fire off in the game? Tell us all of your thoughts down in the comments and then feel free to discuss it all if you so wish. More for Another Crab’s Treasure should be on the way to us all. If we have anything, we will share it all here for you along with everything else we have in the mix.