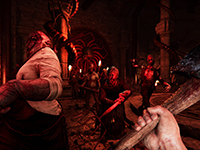 Here we go with one more of the survival shooters coming out with the full reveal for Sker Ritual. A new title coming from Wales Interactive for the PC and presumably the PS5 and Xbox Series X|S. A new title that is aiming to take the story and setting of Maid Of Sker and turn it into a one to four-player co-op shooter. A vast deviation from what the IP has given us before, but it does seem to focus in on the enemies a bit more so it has that going for it. Not to mention a true way to defend ourselves in the world beyond hiding and not making noise while moving about everything. I am still not sure how I feel about that for all of this though.

You can get a little bit of the action here for Sker Ritual in the big reveal trailer, but if you did not know the parent title of it all you might miss all of that. It looks like it is going to be more of the basic shooter as is to be expected, with many of the Quiet Ones rushing us at times. Since they hunt based on sound, it does seem a little odd to be firing off and making all kinds of sound in Sker Ritual, but maybe that will make sense down the line for it all. For now, though, we have this and the other basics to go on for the game. It is still early, so I am sure it will make more sense as the cycle carries forward and we get more of it all to enjoy.

The Quiet Ones are back in this 1-4 player co-op, round-based survival shooter and spiritual successor to the award-winning British horror, Maid Of Sker! Face hordes of new and familiar enemies, supercharged elites with unique supernatural powers, upgradeable steam-punk weapons, interchangeable spine-chilling masks, and mysterious story objectives from the writing talent behind Maid Of Sker, Battlefield 1, and Total War: Rome II.

Sker Ritual is coming to PC (Steam) this summer, with a new-gen launch later in the year.

Did you enjoy Maid Of Sker and wanted to see another in the line or is this just something to use the IP and will not tie in at all? Do you think the noise generated will make more sense in the long run of it all or will that only cause more of the flood to come in? Would you want to play as the monsters here or will it be more fun to join with your friends against all of them? Let us all know down in the comments and then feel free to discuss it all as you wish. When we have more to share for Sker Ritual, know that it will all be here. Just keep a close eye on the site for all of that and much, much more.