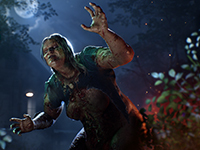 Learn a bit more for Evil Dead: The Game with the latest question and answer session about this Evil Dead IP

Only a few more slumbers until we have Evil Dead: The Game on our PS4, PS5, Xbox One, Xbox Series X|S, Switch or PC. I know I am excited for May 13th to roll on up and suck me into the universe once more. Even if there are still many things left floating out there before the launch that Saber Interactive and Boss Team Games have not fully addressed. Like how we are able to play as Ash from all of the various Evil Dead films and show over the years. Thankfully, the teams are back to give us some more answers to some burning questions we have outstanding still. Especially, on how the single-player version of it all will flow out there.

Some of the following questions for Evil Dead: The Game have been touched on before, but some are new things. Like the fact that we can play the four versus one with all of the AI running everything else. It will help with some of the grind if you cannot find a group of five to head out there to do the same thing. Even if that is not your jam, you can take on side missions in the game to get some skins and learn more of the lore on how all of the Evil Dead bits are in here. The Knowby Tapes out there will fill in some of the gaps between the films and explain the multiverse rules being used to pull in all of the characters from over the decades.

As we get ready for this Friday’s launch, Evil Dead: The Game devs answer questions about player roles, balance, replayability, lore, single-player gameplay options, and much more in today’s Community Q&A video.

Thank you to three of our longtime community YouTubers who have been following and analyzing Evil Dead: The Game ever since we first announced it: Laphin, SlashNCast, and UnCAGEDgamez for their great questions.

Are you ready to get back into the mix for Evil Dead or do you need more to be shown off to get you in? Do you like how the single-player will work here or did you want to have a full campaign out there? How deep into the lore do you think they were allowed to go and will it all be canon for the IP moving forward now? Tell us all of your thoughts down in the comments and then feel free to discuss it all if you so wish. We will keep the news for Evil Dead: The Game flowing out there as it comes, so be sure to keep checking in for all of that here. We will do what we can to bring it all to you as fast as we can out there.