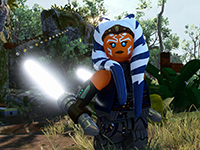 More of your favorite Star Wars characters are rushing into the fun of LEGO Star Wars: The Skywalker Saga

It is definitely fitting for the day here, as we have a whole lot of new characters joining in the fray for LEGO Star Wars: The Skywalker Saga. A whole lot more characters with the new DLC packs that TT Games has ready for us that will include new characters from so many other stories outside of the core Skywalker Saga. Not that we did not have over 300 characters from the Star Wars IP already, but these new batches will give us more of the recent and truly older characters to opt into while playing too. Even if it does not look like many new options of gameplay will be added in for them. That would be a bit more of an undertaking to do, so it can be excused here.

As you will see below, we are getting more of the Star Wars characters added in from the Mandalorian, Bad Batch, Solo, and Rogue One stories. On top of all of that, we will see more of the classic and storm trooper types mixed in too from the grander scheme of the Star War universe. Some deeper cuts will be in there along with some of the fan favorites that I know many have been hoping to add into the fight too. As long as you want to keep going through all of the stories one more time but with characters that should not even be around at the time. Although, I guess if Grogu is only a companion here, it does kind of fit in.

New legendary characters have landed in the galaxy! Who will you play as first?

The galaxy is yours with LEGO Star Wars: The Skywalker Saga! Play through all nine saga films in a brand-new video game unlike any other. With over 300 playable characters, over 100 vehicles, and 23 planets to explore, the galaxy has never been more fun!

Have you been able to get all of the Star Wars characters you have been waiting for in the mix here or is there one still out there for you? Do you think we will see the stories of these other lines added in with DLC too or will it stick to the core nine we have had? How different would you want each character to play or will it work with most being just skin-swapped characters in this title? Let the world out there know what you are thinking and then feel free to discuss it all. More for LEGO Star Wars: The Skywalker Saga is most likely on the way, so be sure to keep watching the site for all of those updates. With that, May the 4th be with you.