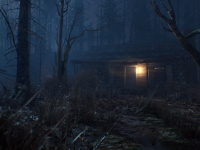 The main theme for Evil Dead: The Game is here to give the same Evil Dead feel but with something truly new

We are almost there at the launch for Evil Dead: The Game with May 13th just over a week away. The anticipation is high over here and we are grinding away to help pass the time so we can see and hear what Saber Interactive and Boss Team Games have been so diligently toiling away on. Thankfully, we do not have to wait that whole time in silence, as we have something new to hear for Evil Dead: The Game. In fact, we have the main theme that we are going to be hearing as soon as we spin the game up and get ready to dive into the four versus one gameplay out there. Although, this one might be short lived if it is just the main screen theme and not something that will be mixed into all of the action out there.

This new track does have the same Evil Dead feel that many out there who love the IP can appreciate. All while still feeling new and original in the mix too. Given that they were able to get one of the original composers back in the chair to do all of this, it makes sense. Not to mention further the feeling that the game is going to be more of the Evil Dead story. They do have all of the voices and nods to everything else, so it is not too shocking to get that feel right back into it all. Have a listen and see what you will be able to hear many times at the end of next week when the game does fully launch. Maybe we will have more to listen to as well. As long as the teams want to keep offering up the fun to keep the hype rolling out there.

Evil Dead: The Game — The Music Of: Main Title

Feast your ears on the Main Title from Evil Dead: The Game!

Composed And Recorded By: Joseph LoDuca

Reserve your copy of Evil Dead: The Game now and get two bonus Ash Williams outfits from Army of Darkness!

Evil Dead: The Game is available to pre-order now for release on May 13, 2022, on PC via the Epic Games Store, PlayStation 5, Xbox Series X|S, PlayStation 4, and Xbox One.

Do you think that this track is fitting for the Evil Dead IP or do you think it should have been mixed in differently? Will this only be the track we hear at the loading screen of it all or will it be used in various other ways too? What do you think we will hear playing in the background of the rest of the game and will it even be noticed by the players in the heat of all of the terror? Tell us all of your thoughts on this down in the comments and then feel free to discuss it all if you wish. More for Evil Dead: The Game will be on the way on the site, so please keep an eye out for all of that. This is the one title that has had all of my attention since it was first announced.