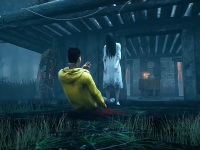 Dead By Daylight has had the most recent killer and survivor out there for a bit now, but some of you out there might have missed it for now. Given that it is Sadako from The Ring, it makes sense that most would not want to watch the screen to have that curse laid down on them. Just in case that is the fear for many out there, Behaviour has offered up some new gameplay for Dead By Daylight that highlights the new killer and setting that you can now play on the PS4, PS5, Xbox One, Xbox Series X|S, Switch, and PC. Not to mention a nice and new reminder to get the DLC that is out there too.

For those that are still on the fence about adding the new killer into their Dead By Daylight, you can see Sadako in a bit of the action just below. You can also see how some of her powers and abilities will handle in the game for you. Not only that, but also how some of the other kills will go down in the matches here. It is interesting to see more of the meat hooks used here for Dead By Daylight than what we know from the films, but that is most likely a gameplay balance thing instead of sticking as close to the lore as possible. Have a look at the new gameplay and then feel free to down the new killer if it fits your style.

The fathomless sea. The stagnant water of a long-forgotten well. Neither run deeper than her infinite wrath.

With otherworldly power and a fearsome temper, Sadako was left to perish and rot in a watery grave. Yet her dark presence only strengthened, manifesting into a cursed videotape that left countless viewers dead, their faces twisted in a mask of terror. Like the vast ocean her mother once gazed upon, The Onryō’s fury is profound.

Survivors will soon find themselves condemned to a haunting fate, forced to act quickly or fall victim to Sadako’s fury. Though the flickering glow of a television has long been a source of comfort, the mere sight of one will soon send shivers down your spine.

Have you had a chance to experience Sadako in Dead By Daylight or did you hold off until now? Do you think she fits the game setting more or the film setting more for you? Would you think it would be fun and interesting to see it stick closer to the curse side of it all or do you like the physical violence more? Let us all know down in the comments and then feel free to discuss it all as you wish. More for Dead By Daylight will be coming at us, so be sure to keep checking in here for all of that and everything else that we have to offer up.