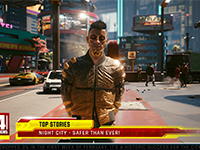 The day is finally here with the PS5 and Xbox Series X|S getting the official upgrade for Cyberpunk 2077. It was supposed to be out about six months ago to get the hopeful fans back in for the game, but it looks like it took CD Projekt RED just a bit longer to get it done. As long as it brings Cyberpunk 2077 to the same playable state that it has been for the PC for a while now, it should be worth the wait. I know it is something that I have been waiting for to see where the game should finally be. Now it is here and ready to download for the new consoles for free. Even if it is a bit of a massive update and space needed to get out there for now. It is what it is for now.

Those that may have been holding off on Cyberpunk 2077 this entire time will also have a chance to see if it is in a place to finally pay for now too. To try to bring some players back in, there is also a free demo that will let you experience a few hours of the game in its current state as of right now too. A smart move on the team to try to show everyone beyond a simple trailer that Cyberpunk 2077 is in a state that was originally promised to us all. Even if the PS4 and Xbox One versions will still be on the lower side of it all. All the platforms are still getting the updates and changes to improve it all, but it will certainly be the next-gen and PC that will have the game in the best state.

The following video for Cyberpunk 2077, and other gameplay we have on our channel, does make the game look vastly better than it did at launch. It is still nowhere near what was shown during all of the press conferences before launch, but it does feel like it is getting closer visually and basically there. Even if it still feels like there are massive portions of Cyberpunk 2077 still missing in the final build of the game. I am talking about gameplay features and not just the visual and audio parts of the game. Have a look at it all just a little lower and see if you will be letting it all take a bit more space on your systems.

With Patch 1.5 — Next-Generation Update, Cyberpunk 2077 takes advantage of the additional power of the newest generation of console hardware, allowing for ray tracing features and 4K with dynamic scaling on Xbox Series X and PlayStation 5, faster loading times, and a variety of other visual and technical improvements. On PlayStation 5, the game will additionally utilize the DualSense controller’s adaptive triggers and haptic feedback functionalities.

The new update also comes equipped with a host of changes and improvements across all versions of Cyberpunk 2077. These range from further performance and stability optimizations, to tweaks to gameplay and economy, the open world of the game, map usage, along with new interactions for relationships and an overhauled Fixer system. Furthermore, new pieces of free additional content have also been introduced, including rentable apartments, new gear, character customization options, and more.

Following the release of Patch 1.5 — Next-Generation Update, Cyberpunk 2077 is now available Xbox Series X|S and PlayStation 5 as a free upgrade for current owners of the Xbox One and PlayStation 4 versions, as well as a standalone digital purchase. The game, along with Patch 1.5, is also available on Xbox One, PlayStation 4, Stadia, and PC.

Will this update finally get you back in for Cyberpunk 2077 or did the damage from the launch sour you forever from the game? Do you think we will see the missing gameplay features added in over time or will it just be more to keep the game functioning? Do you think that the free demo of it all will help bring players back too or will it always be the title to skip after gamers ruined the launch? Let us all know down in the comments and then feel free to discuss it all. If we have more to share for Cyberpunk 2077, know that we will have it all here. Just keep a close eye on the site for all of that and everything else we have to update.