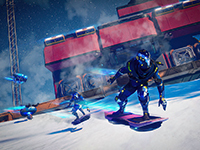 Here we go with another fun and fast-paced looking title for the PC with the announcement we have for LEAP. A title that is very basic and generic, but it looks like the game will be anything but that. All of which is based on what Blue Isle Studios has to offer up here with a very cheeky and fun bit of gameplay for LEAP. I say cheeky, as it does start out as a bit of an in-game cinematic bit for the game but then it transitions over to the full-blown action we should expect from a game in this vein. Not to mention something that you can jump into on January 19th with the upcoming closed beta test that they are planning too.

If this is the first you are hearing of LEAP, you are not alone. This is a new online multiplayer game that places us in the roles of humans in some exosuits running around and killing each other for fun. All while perfecting the movements and forms of the four different classes of character and arming ourselves to the teeth with all kinds of weaponry. More or less what we should be expecting from a title like this. Even if I was kind of expecting a little bit of a different thing from a title called LEAP. I kind of expected to see something built into the name with some high-flying movement or something. Maybe that is coming down the line or something.

LEAP is a fast-paced, online multiplayer first-person shooter featuring epic battles with up to 60 players, each armed to the teeth. Fight for either the United Earth Defense Coalition (UEDC) or the rebel Exo-Terrans — whoever pays the most, wins your trigger finger and excessive arsenal.

In LEAP, players will select from four unique classes, each delivering a unique balance of power, agility, and defense as well as epic abilities that bring shock and awe onto their foes. Call in orbital strikes, set up automated turrets, or control guided cruise missiles as each exosuit is armed to the teeth. Large-scale combat takes place on a variety of stages and skilled mercenaries use jetpacks, grappling hooks, and highly distinctive Personal Vehicles to close the distance on control points and active firefights. Nothing is more menacing than a LEAP mercenary saddled on a mechanical moose galloping at full speed.

All those interested in trying out as a LEAP mercenary should ready their loadout as the Closed Beta Test starts on January 19.

Is this the title you were expecting from something titled LEAP? Do you think that having only four different classes will function well for a sixty-player match or will it be varied perfectly here? Will you be joining in on the closed beta test here or will you wait for the full release to see how it all functions out there? Let us all know down in the comments and then feel free to discuss it all. More for LEAP should be coming to us all soon, so be sure to keep checking back on the site for all of that. You should not be let down by this at all.