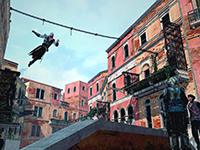 It took a bit of time, but it looks like the Switch-only gamers will be getting a chance to dive into the Assassin’s Creed: The Ezio Collection. That is the latest announcement from Ubisoft and that we will get to see it all join out there on February 17th. You can now start the celebrating and get your pre-ordering out there ready so you can dive into one of the best Assassin’s Creed runs that have been out there to date. At least that was the case until the most recent titles changed things up and offered up a whole new experience. Hopefully, this is coming to bring more of the titles to the Switch gamers too and more original games in the line in the future.

Just as the last version of the Assassin’s Creed: The Ezio Collection, this will house the three titles in the Ezio line and any of the DLC that came out to date too. There will also be two films in the mix of the games too so you can get a deeper understanding of the characters and world beyond what is just in the games. This was a massive undertaking before and there is a whole lot of story to take in to further Assassin’s Creed story. If you have somehow missed out on any of that already given that all of this originally dropped on us over five years ago at this point. I am sure if you wanted to know you would not know it all by now. This is just a good way to play the game on the go and keep the fun rolling in all honesty.

Have you been waiting for more Assassin’s Creed to hit the Switch out there or have you been digging into everything already there and might be skipping this? Do you think that this will give us more ports for the Switch or will this just be to carry the IP on as they work on a new title? Would you want to see the whole of the IP out there on the Switch or will you always go with a different platform for this line? Let us all know down in the comments and then feel free to discuss it all. If there is more for the Assassin’s Creed: The Ezio Collection, we will try to share it all with you. Just keep checking back for all of that and much more here.